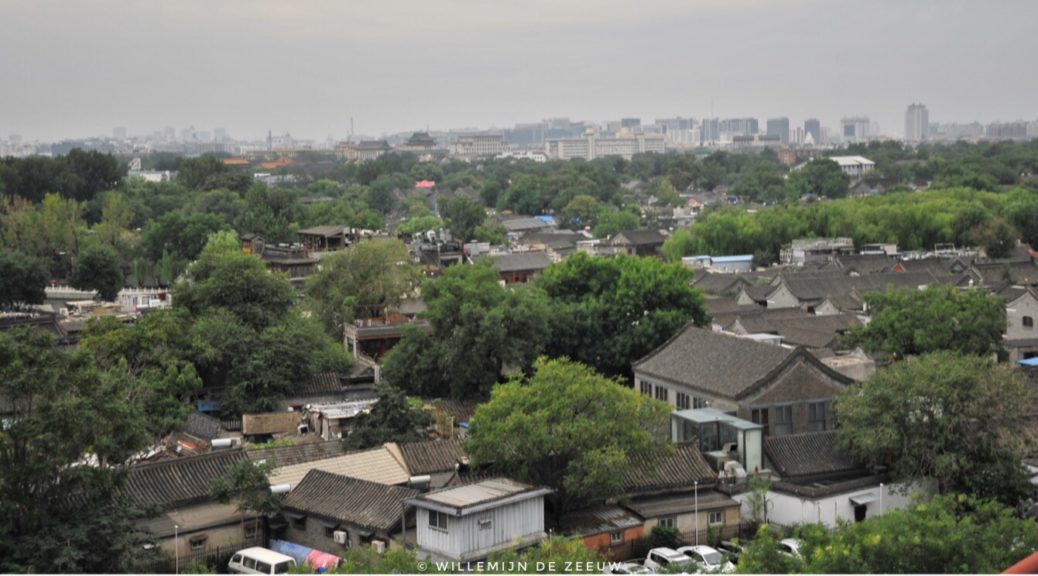 For my last day in Beijing, I was looking for something to do that wouldn’t make me feel like I was melting in the humid heat of the city. I also still needed to visit the Drum Tower, which was right around the corner from my hostel.

Apart from the Drum Tower, there were two places in Beijing I still wanted to visit: The Summer Palace and the Temple of Heaven. I chose the Temple of Heaven for a couple of different reasons. First of all, the name of this tourist attraction is slightly deceptive. It’s not just a temple, it’s a large park located close to the city centre, with plenty of other things worth seeing. Another reason why I didn’t pick the Summer Palace, is because I’d just spent two days climbing stairs on the Great Wall and in the Forbidden City. The Summer Palace complex is quite large. I decided that it was too much walking and that I’d much rather visit the Temple of Heaven park instead. 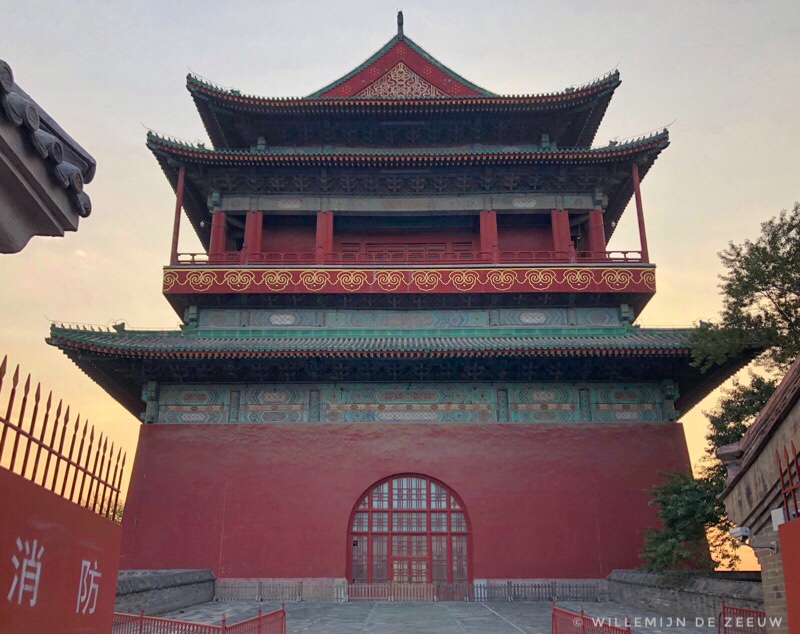 Before making my way to the Temple of Heaven, I wanted to go see a performance at the Drum Tower. I’d walked past it several times in the past few days and I had admired both the Bell Tower and the Drum Tower from my hostel’s rooftop terrace. I got distracted on my walk to the Drum Tower though. There is a small square between the towers. It’s a popular meeting place for the locals, which made it my favourite spot in the neighbourhood. Children come here to play, the elderly come here to chat together, and some people use the open space to get some excercise.

The latter is what distracted me. Three women were dancing and twirling around the square, holding sticks with long wide ribbons depicting dragons. When they saw me looking at them, one of the women handed me her ribbon and gestured I should try it. Ribbon dancing is much harder than it looks, but I’m really glad I tried it. It’s so much fun! You have to make sure to keep the ribbon moving constantly, without getting it tangled up. I can see why this is used as a form of excercise, because you can’t do it if you just stand in one place. I really enjoyed this moment on the square. The women didn’t speak English and I don’t speak Chinese. Nevertheless, they invited me to join in their morning activity. It felt incredibly special to me. I think my favourite aspect of travelling is spontaneously connecting with locals like this. 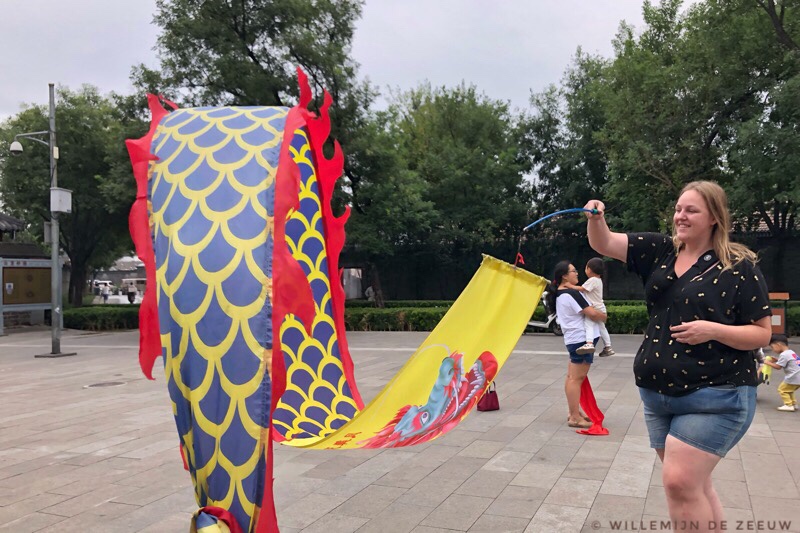 I said goodbye to the three ladies and continued to the entrance of the Drum Tower. In the past, the Drum and Bell Towers were used to indicate the time in the city, much like church bells in Europe. Until 1924, when the last emperor was overthrown, the official time in the city was indicated by a morning bell and a dusk drum. After climbing the incredibly steep stairs of the tower, I admired the collection of drums, most of which are replicas. One of the original drums is on display behind glass. The paint has faded, the skin is broken and the barrel is sagging, but it was still fascinating to see, because it’s so old. There is also a collection of old clocks in the room. Among them was a replica of a water clock, which was something I had never seen before.

Taking care to step over the tall threshold, since you’re not supposed to step on it, I went outside to admire the view. Although there is a walkway around the whole tower, you can only visit the south side, the rest of it is fenced off. The Drum and Bell towers are the tallest buildings in the surrounding neighbourhood. The sky was grey due to clouds and smog, but the view was still wonderful. I looked out over the grey roofs of the surrounding hutongs, watched the busy road in front of the tower, and spotted people on their roof terraces.

Soon it was time for the drum performance. Two men and a woman played on three of the largest replica drums. Surprisingly, it wasn’t as loud as I had imagined it would be, but the acoustics of the room were quite good. The performance lasted about 4 minutes. It’s not difficult to imagine how the sound could carry across the old city if all the doors were open. I was very glad I had decided to come here for the performance, because I really wouldn’t have wanted to miss it. 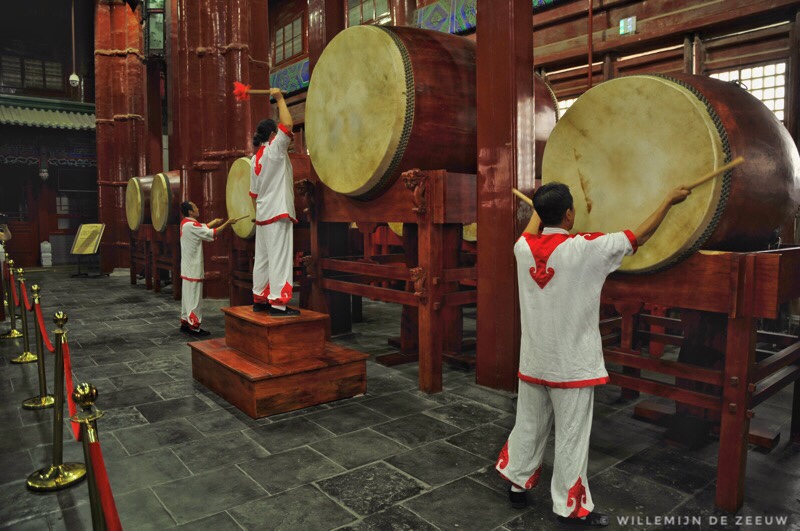 Mid day was approaching fast and the temperature kept rising. I was eager to escape the heat of the city. I hopped on the metro at Gulou Dajie, about 300m from my hostel. I travelled to Tiantandongmen station, next to the eastern gate of the park. When I walked through the park, I noticed a lot of people staring intently at the trees and the flowerbeds. At first I didn’t see why, but then a black squirrel sprinted from the flowerbed, across the path, and up a tree. The squirrels weren’t paying much attention to all the people in the park. Instead, they just went about their business of collecting walnuts. I had never seen a black squirrel before, so seeing them up close was really cool. 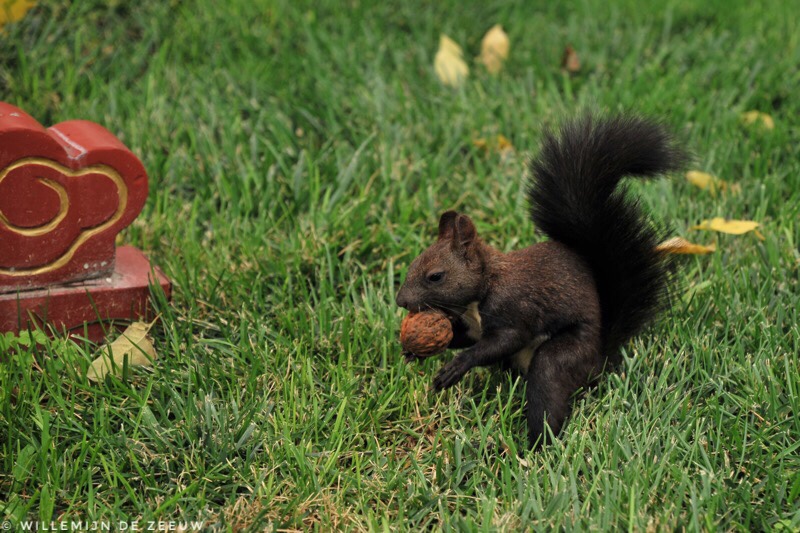 After taking some photos, I continued walking towards the temple. Construction of the Temple of Heaven complex began in the early 1400’s, during the reign of the same emperor who also ordered the construction of the Forbidden City. As a result, the architecture is quite similar. The main building is called the Hall of Prayer for Good Harvests. It is a majestic circular building with a three-tiered tile roof, built on a three-tiered marble platform, where the emperor would come once a year to pray for – you guessed it – a good harvest. The building is made out of wood, and was constructed without any nails, like many buildings of this era. However, the current temple isn’t the original 15th century building. That building was struck by lightning in the late 19th century, and completely burned down. It was rebuilt soon after, and I’m glad it was, because it’s stunning to look at. 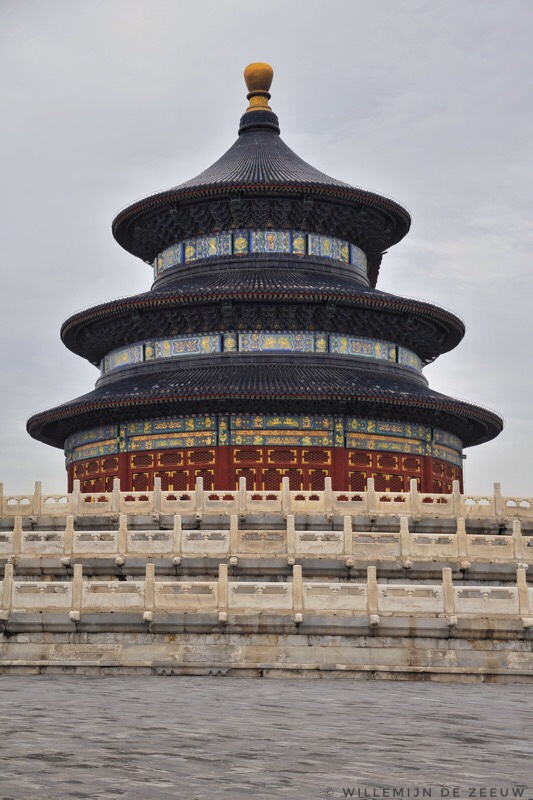 I spent some more time wandering around in the park. I checked out some of the other buildings, but explanations in English were limited, so I probably missed out on a lot of information. What I loved most about the park, is the Long Corridor, a covered walkway that leads to the Hall of Prayer for Good Harvests. The corridor itself is nice to look at, but what I enjoyed more was watching the locals play cards. Their games sometimes get quite heated, so even though I didn’t understand the game or the language, it was great fun to sit down for a while and observe.

When it started to rain, I made my way back to the metro, and returned to my hostel. I had planned to go looking for street food, but I didn’t feel like going out in the rain. Instead, I stopped at a small convenience store on the way back to the hostel, to buy some snacks and drinks. I spent the evening repacking my backpack, in preparation for the last leg of my train journey.

In the morning, I was driven to Beijingxi railway station, where I boarded the high speed train to Hong Kong. No comfortable sleeper carriage this time, but a seat with limited legroom. The journey wasn’t too bad though. I spent a lot of time walking around and admiring the view. The temperature outside rose to 38°C in the afternoon, so I was thankful to be on a train with air conditioning. 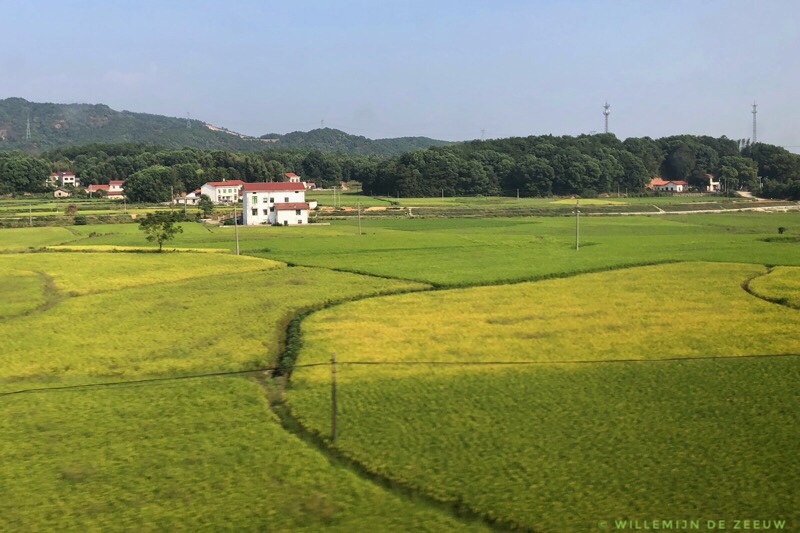 As if the cramped seating didn’t remind me enough of a plane, I bought a lunch in a plastic tray that looked a lot like airplane food. It tasted nice though, and I was quite pleased with myself for managing to eat a whole meal with chopsticks, whilst I was on a moving train. 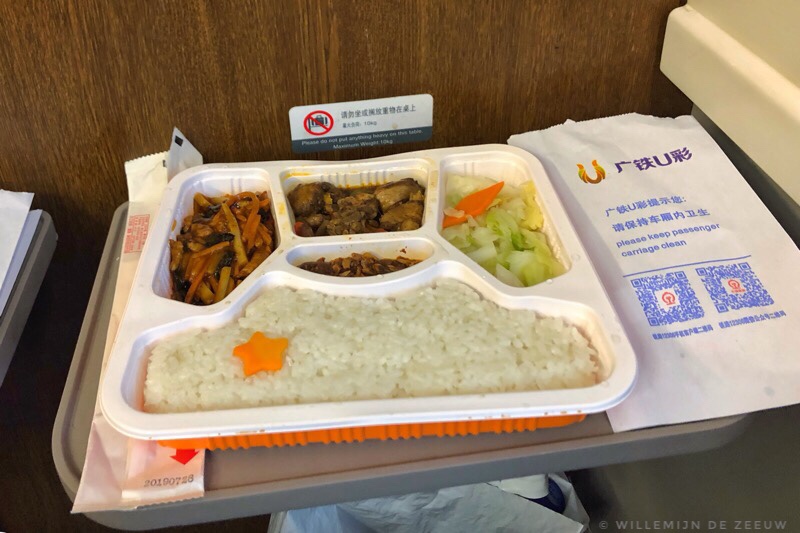 I arrived at Hong Kong West Kowloon station in the early evening, after more than 8,5 hours on the train. I hadn’t been able to contact my best friend during the day, because the internet on the train wouldn’t cooperate. I had sent her a message asking whether or not she’d be able to meet me at the station. I got through border security and into the main hall of the station and looked around, but there were hardly any people there at all. I connected to the train station’s wifi. Free from the Great Firewall of China, I finally received the messages she’d sent me earlier that day, telling me she couldn’t be there. Even though we’d see each other the next day, it felt weird to make my way through her home town on my own. I got on the metro, which is called the MTR in Hong Kong. It was surreal to finally see the city my best friend has lived in pretty much her whole life. I was very much looking forward to spending the weekend with her, and seeing the city through her eyes.

I apologise for the delayed travel journal update! I’ve been feeling a little under the weather since my return to Holland. I hope to write the last few stories very soon, so keep an eye on my Facebook page.