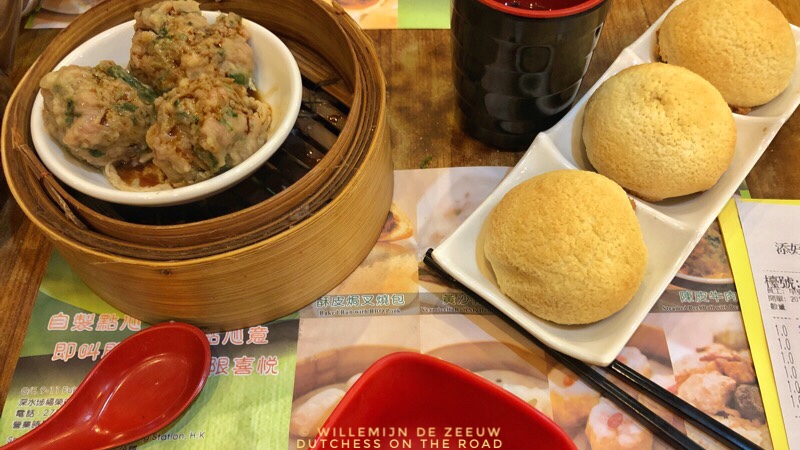 I spent the morning packing my backpack for the long flight home and then went for a walk. I’d been getting used to my little corner of this city, and it felt strange to be leaving so soon. Since I was staying on Nathan Road, there was always something see. Hong Kong is definitely one of those cities that never sleeps. Although I’m not used to that at all, it was funny to see how quickly I adapted to it.

I walked the same route around my hotel every single day. From the hotel to the bakery and from the bakery to the Jordan MTR station in the morning. And after spending the day sightseeing, I would always go to the supermarket around the corner before heading back to my hotel. As I was walking around on my last day, I was genuinely sad to be saying goodbye to it all.

I had heard of Tim Ho Wan before I even left Holland. It’s known as the cheapest Michelin-starred restaurant in the world, selling the most incredible dim sum. When I heard about that, I immediately decided it would be the perfect place to celebrate the end of my trip. Due to the popularity of the restaurant, I decided to avoid the busy hours around dinner time. In hindsight, I probably would have been fine, because it’s not like other tourist attractions had been particularly crowded that week. In fact, Disneyland had been the quietest theme park I’d ever visited.

Nevertheless, I decided to have a late lunch, and arrived at the restaurant in Sham Shui Po around 2 o’clock. The massive queues I’d seen online were absent, but the restaurant was nearly full. I’d skipped lunch and spent quite some time walking around, so I’d worked up an appetite.

Thankfully, I was seated right away. Since I was on my own, I got seated at a shared table, where two other people were already enjoying their lunch. I’ve come to expect this in China and Hong Kong, so it was actually quite nice. Even if you don’t talk to the other people at your table, it still makes you feel like you aren’t eating alone.

I was given a paper menu and a pen, as well as a cup of tea. I read the poorly spelled translations and crossed off a couple of boxes. Having no real experience with dim sum, I had no idea if there was any particular order in which I should eat things. Maybe it didn’t even matter at all. As long as I went with the order in which they appeared on the menu, I guessed I couldn’t go wrong.

I ordered two types of steamed dumplings: siu mai and har gow. The first is the proper version of the street food snack I’d slowly developed an addiction for. These were much better though. The other dumplings are usually translated as crystal shrimp dumplings. This name refers to the thin dumpling wrapper. The dough becomes translucent when steamed, showing the pink shrimp filling inside. The taste is quite delicate, which is beautifully illustrated by the way these dumplings are folded. The amount of folds in the wrapper is said to be a sign of the chef’s skills.

For my next order, I picked three dishes, one of which was actually a wild guess. I’d meant to order the rice steamed in a lotus leaf, but I couldn’t figure out where it was on the menu. Apparently I’d ordered rice steamed with a layer of pork and cuttlefish on top of it. I struggled a little bit with this dish, fumbling about with chopsticks an spoon. The taste was alright, but I don’t think I’d order this one again. The other two dishes were much bigger hits though.

The first of those were steamed beef meatballs with tofu skin. The texture was very pleasant, but the flavour was a lot more subtle than I expected. Still, a dish I would absolutely recommend. I had saved the best for last though. If anything could be called their signature dish, it would be the char siu bao. Traditionally, these are steamed buns filled with barbecue pork. However, at Tim Ho Wan, the buns aren’t steamed. Instead, they are baked in a way that is similar to baking pineapple buns. The result is a fluffy cloud of the softest white bread, with a thin crunchy crust. The barbecue pork filling is soft and not overly sweet. These are probably the best barbecue pork buns I’ve ever had, or ever will have.

The only downside to this restaurant is the fact that I went there alone. Being on my own meant that I had three or four pieces of whatever dish I ordered. I wish I could have gone with one or two friends, as it would have allowed me to try so many more different dishes. The restaurant does live up to its reputation though. I had never eaten at a Michelin-starred restaurant before, because I never imagined it would be something I could afford. My meal at Tim Ho Wan added up to a humble €14 though, and I’d arguably eaten far too much. It’s probably a good thing I went there on my last day in town, or I’d have eaten there every single day.

Back home in Holland, I wouldn’t be surprised when a mediocre takeaway pizza ends up costing me just as much. I do wish I had any way of experiencing this food at home though. I have looked up recipes, but some of the ingredients are quite hard to find, and other dishes are actually a lot of work (looking at you, barbecue pork buns). At this point, I’d settle for finding a restaurant that’s even remotely similar.

I felt absolutely stuffed and needed a nice and easy way to spend the rest of my day. I hopped on the MTR and made my way across town to Central. Earlier that week, my friend and her dad had shown me the city from Kowloon Peak. I had yet to visit the city’s most famous viewpoint though. Victoria Peak is the one that’s on all the postcards. It is the highest point on the island at 552m. As such, it offers a great view of the skyscrapers in Central, and of Kowloon across the harbour.

There are a couple of ways to get to the top, but since I didn’t feel like walking or taking the local bus, I went for the touristy option. I took the historic Peak Tram to the top, and I’m glad I did. There was virtually no one at the peak tram station, and the views along the way were wonderful. Unfortunately, this day was another smoggy and humid one. Although I could see Kowloon, that side of the harbour wasn’t much more than just grey shapes. At one point, the sun tried to make an appearance. It made the view a little clearer and a lot less grey, but the moment passed fairly quickly.

I sat around for a long time, waiting for it to get dark. Sadly it was too cloudy for a good sunset, but the night view was worth the wait regardless. The coloured lights on the skyscrapers looked magical. Unfortunately, it’s nearly impossible to show this in a photo.

Whilst watching the lights, one of the towers caught my attention. The International Commerce Centre’s facade was being used as a massive billboard, advertising the Symphony of Lights. This daily lightshow on the buildings of Central is best viewed from across the harbour, so I decided to leave “The Peak”. I made my way back to Kowloon and went to the Avenue of Stars. From this boulevard along Victoria Harbour, you can watch the lights on the buildings dance to the music that is played over the speakers. Apparently it’s even the biggest permanent lightshow in the world. As cheesy as it sounds, I think you really shouldn’t miss this when you visit Hong Kong. I couldn’t possibly have asked for a better way to end my time in Hong Kong. I headed back to my hotel feeling content, and ready for the long flights back home.