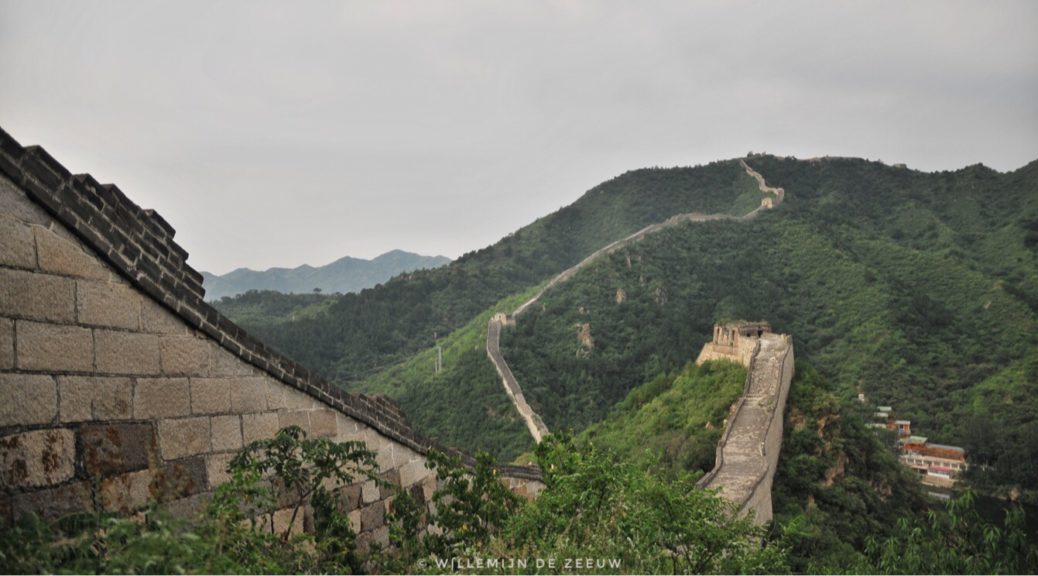 I woke up after my first night in Beijing, hoping that the morning would be less hot than the previous day. It was, but it wouldn’t stay that way for long.

I was picked up at 7 AM, by Wilson, my guide and driver for the day. The reason for this early hour was the crazy Beijing traffic. We were on our way out of a city of over 21 million people. Our destination for the day was Huanghuacheng, to see the Great Wall of China up close, and to walk on it. My main reason for taking this private tour was avoiding the crowds. I’ve seen photos of the “official” part of the wall at Badaling, where it’s so full of people, you can barely see the wall. It would’ve been cheaper and easier, because there’s a shuttle bus service from the city, but I’m glad I didn’t go there. I really enjoyed the drive to Huanghuacheng. We passed through villages and drove on picturesque countryside lanes. When we arrived, I was excited to see there weren’t any other tourists around. 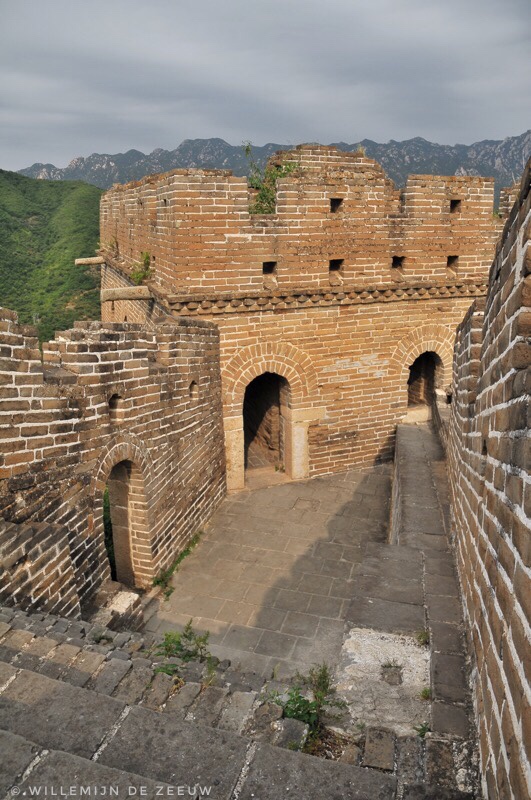 The location is stunning: a reservoir between the green hills and a mostly unrestored section of the Great Wall on either side. We crossed the dam and made our way to the wall. Since this is not an official visiting area, the access to the wall is dubious at best. I’m not even completely convinced it’s legal. There is no cable car, nor an easy and safe walkway. Instead, there’s a path full of loose rocks. At the end of it is a narrow ladder, leading to one of the windows of a watchtower. It didn’t feel particularly safe and I wouldn’t recommend coming here on your own.

However, all of that melted away when I exited the watchtower and walked on the wall. A walk on the Great Wall of China is quite the workout, as it goes up and down with the shape of the hills it was built on. Some parts are just steep flat surfaces, which are a little scary to walk on, since many stones are cracked and large parts of the battlement walls on either side are missing. Other parts of the wall consist of stairs with narrow and tall steps. The broken stones don’t make the climb any easier. I walked past the next tower and up to a good viewpoint. The weather was stifling again and despite the small breeze, I didn’t feel like going on a long hike. Especially since the view was so good where I was. The most amazing part of my visit to this part of the wall was the silence. I saw less than 10 other visitors, and spent a while sitting on the ancient steps, admiring the view. Small red and black birds fluttered around the battlement walls. In the surrounding trees, the cicadas were making a lot of noise, which somehow added to the silence. 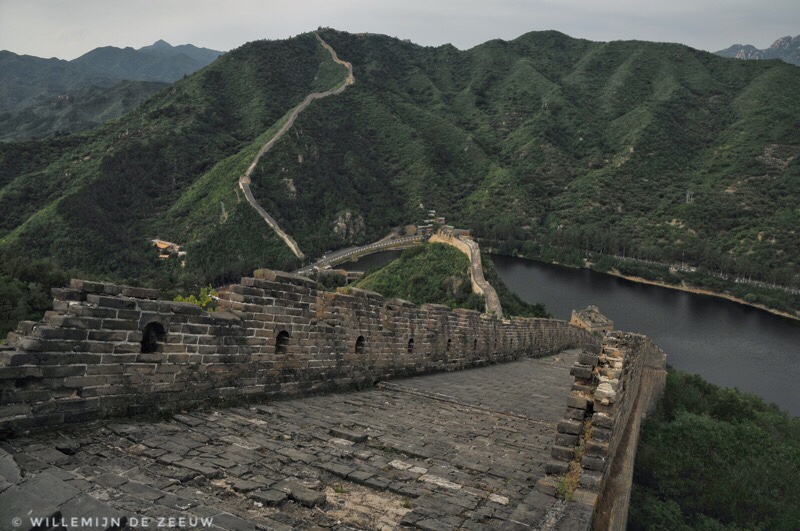 It’s hard to wrap your head around the enormous effort it must have taken to build this wall in such a tough location, and without modern technology. A lot of people died during the construction of the Great Wall. So many in fact, that it is nicknamed “the longest cemetery in the world”, because most of the people who died while building the wall, were buried inside the foundation. Wilson was able to tell me a lot about the wall, but also left me enough time to roam around on my own. After I was done doing that, we went back down the hill for lunch. Don’t ask me how I managed to climb out of that window and down the ladder; it wasn’t exactly graceful. 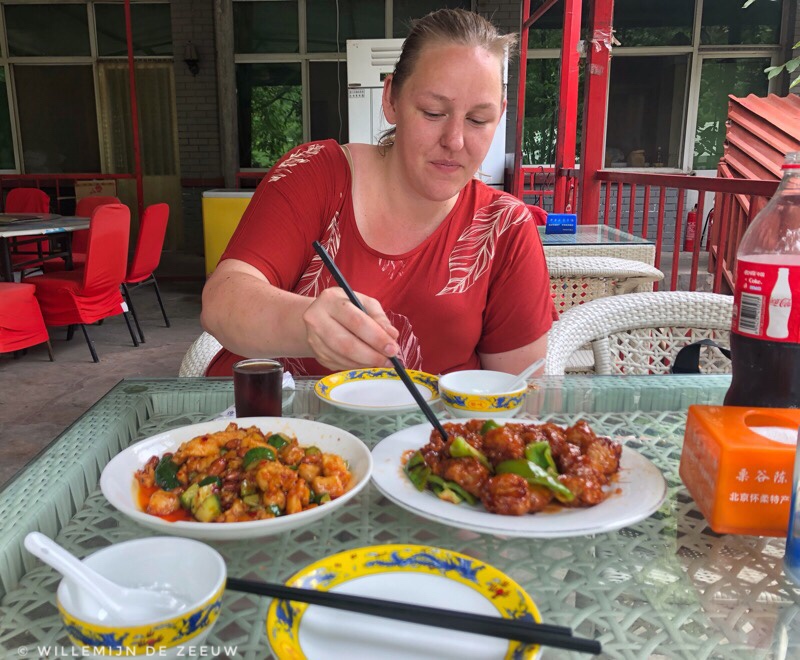 Lunch consisted of two dishes, an internationally well known favourite – kung pao chicken – and a local speciality that didn’t seem to have a name, except for “vegetarian meatballs”. I loved these, and I wish I knew how to replicate the recipe at home. The small crunchy bites are made of potato and daikon radish, with some wheat flour to stick them together. They are deep fried, covered generously in a sticky red sauce, and served with chunks of green bell pepper.

Back in Beijing, I visited the tea house inside the Bell Tower, just around the corner from my hostel. I sat down for a tea ceremony, during which I got an explanation about the different types of tea on offer. I bought two small tins of tea and returned to my hostel for the rest of the day. 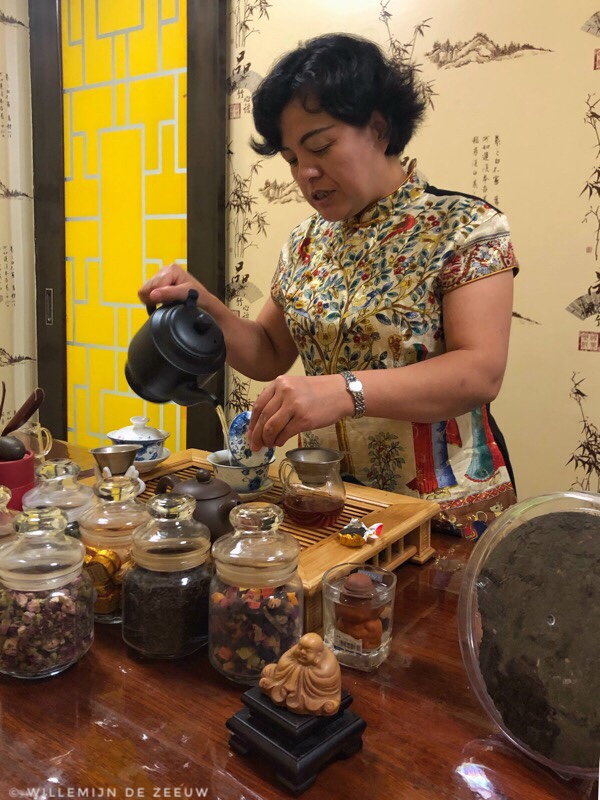 The next day, I visited Beijing’s most famous places: Tiananmen Square and the Forbidden City. The gigantic imperial palace complex is called the Forbidden City because common civilians weren’t allowed access when the emperors lived there, but the official name is actually the Palace Museum. I didn’t get up as early as I probably should have, because my legs were sore from the previous day of climbing the wall. I took the metro to Tiananmen East, where I arrived at a quarter to eleven. I then spent nearly one and a half hours queueing for the security checkpoint. Thankfully, I’d brought a power bank for my phone, so I spent most of that time editing photos for the blog. When I finally got through security, I was right beside the famous red gate that bears Mao Zedong’s portrait. It was interesting to watch all the people roaming around. Foreign tourists, like myself, took a quick selfie at the gate and tried to make their way into the Forbidden City as quickly as possible, after such a long wait. Most Chinese visitors spent more time at the square, some of them holding small Chinese flags while posing for a photo. Meanwhile, construction workers were building temporary tiered seating, in preparation of the National Day parade, in which Beijing will celebrate the 70th anniversary of the People’s Republic of China. 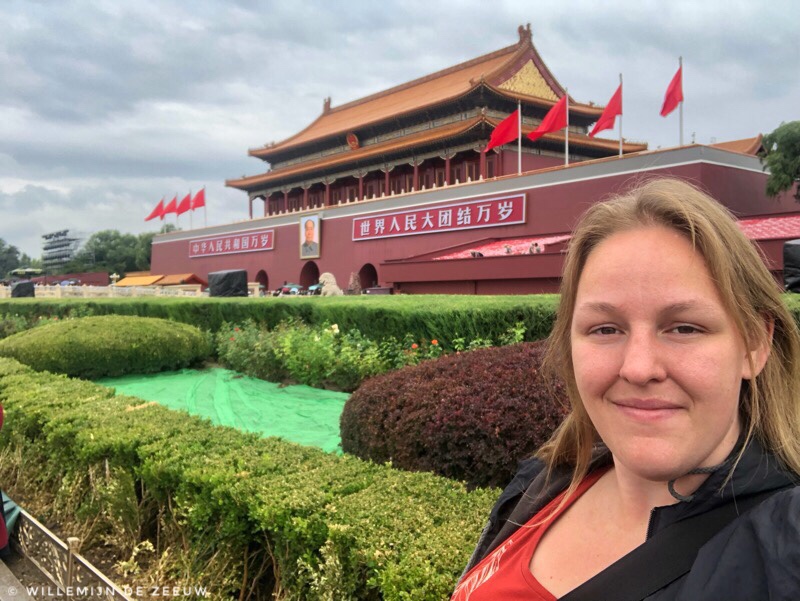 I was worried that the Forbidden City would be very crowded. Although it wasn’t exactly quiet, this is the largest imperial temple complex in the world, so the large amount of space helped to make it feel much less busy. Most tour groups seemed to stick to visiting the largest buildings, on the central axis. This meant that I could actually find some peace and quiet by taking a detour to visit some of the smaller buildings. 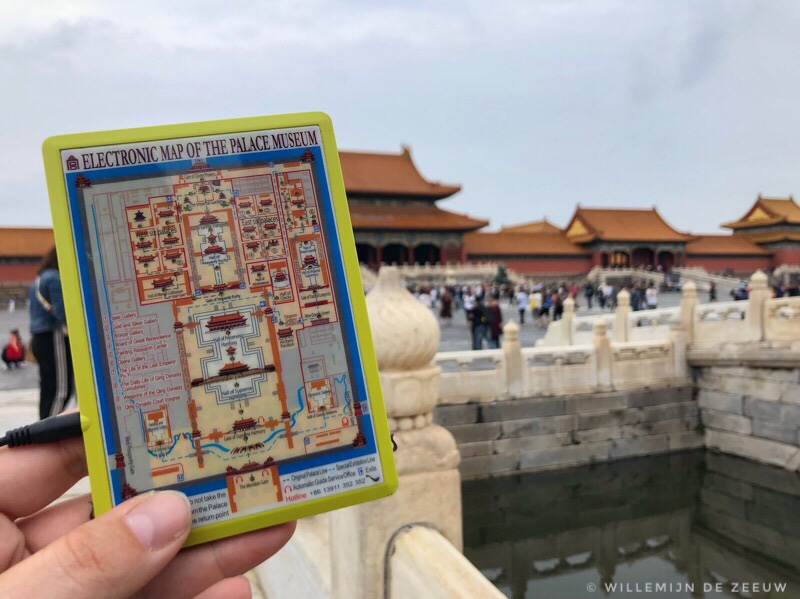 Eager to learn more about the imperial city, I opted to use the official audio guide. In hindsight, I wish I hadn’t. It’s automatically triggered by location, and the earpiece doesn’t really fit European sized ears. I don’t know whether something was wrong with mine, or if they’re always glitchy, but some locations simply refused to start, while every time I tried to adjust the volume, I had to listen to the rather lengthy introduction again. I must have heard it at least 10 times. I wish I was exaggerating. Frustrated by the audioguide, I sought help from Google translate. I’d downloaded Chinese, so I figured I could just translate the signs and read them. However, when the app called an intricately decorated Ming dynasty porcelain vase a “fried bottle”, I gave up on that plan as well. 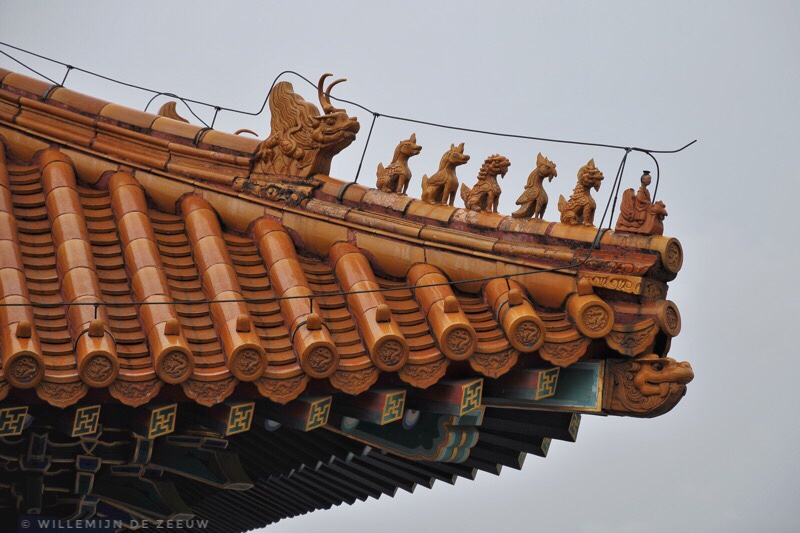 I spent the rest of my time enjoying the architecture, taking in all the gorgeous details of the woodwork and the rooftops. I particularly liked the library building. All buildings have extravagant names here, and this one is called the Pavilion of Literary Profundity. The building is not open for visitors, which meant most people didn’t bother with it. The area was quiet, out of the way of the main route. Although it has the same style, it seemed to be the only building with a different colour scheme of black and green, instead of red, orange and gold. I later learnt that black is a colour that symbolised water in ancient Chinese culture, and the colour of the building was specifically chosen to protect it against fire. 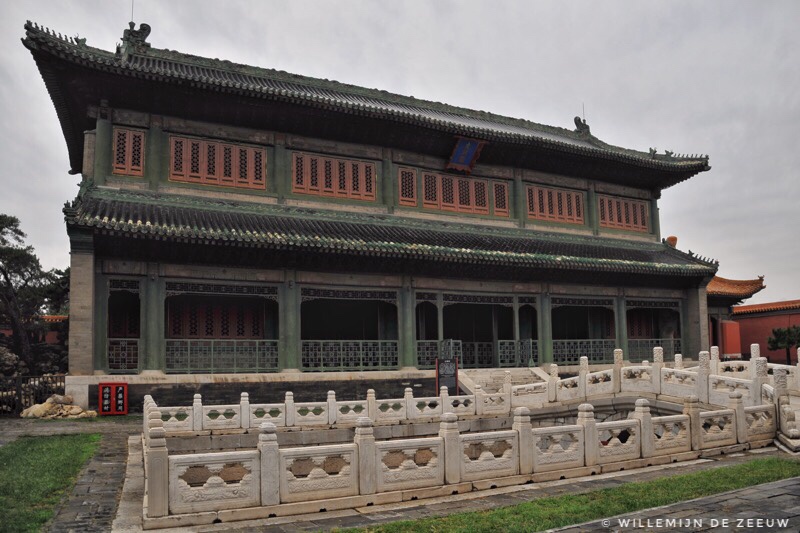 In a city largely made of wood, fire protection was very important. There are large bronze vats all over the place, which used to be full of water at all times. They were even heated in winter, to prevent the water from freezing. After roaming around and taking many photos, I arrived at the northern gate, which serves as the exit to the Forbidden City. Right across the road is Jingshan Park. Even though I was getting sick of climbing stairs, I made my way up to the Pavilion of Everlasting Spring, from where I had a fantastic view of the Forbidden City. 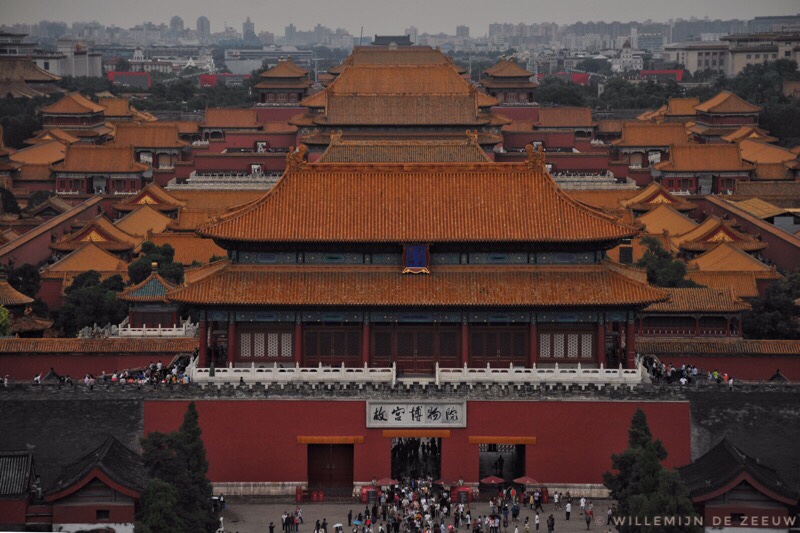 To complete a day full of imperial history, I decided to go out for dinner and have Peking duck, a dish that is believed to have originated in the imperial kitchens. Wilson had recommended a restaurant that was conveniently on the route back to my hostel. I ordered half a duck and watched the other diners to learn the proper etiquette. The duck comes deboned and sliced into strips, and is served with small pancakes, cucumber, spring onion and a variety of sauces. After filling a pancake, it is rolled up and traditionally picked up with chopsticks to eat it, but I saw most people picking up the rolled pancake with their hands, so I decided to do the same. I’d like to think my chopstick skills are not terrible, but keeping these pancakes under control with them was hard. I really loved the taste of this dish though. It was a fantastic array of flavours and textures. The meat was soft and juicy, the skin was crispy, the vegetables were refreshing and crunchy, the dark sauce was sweet, and the red one was spicy. I will miss this very much when I get back home. 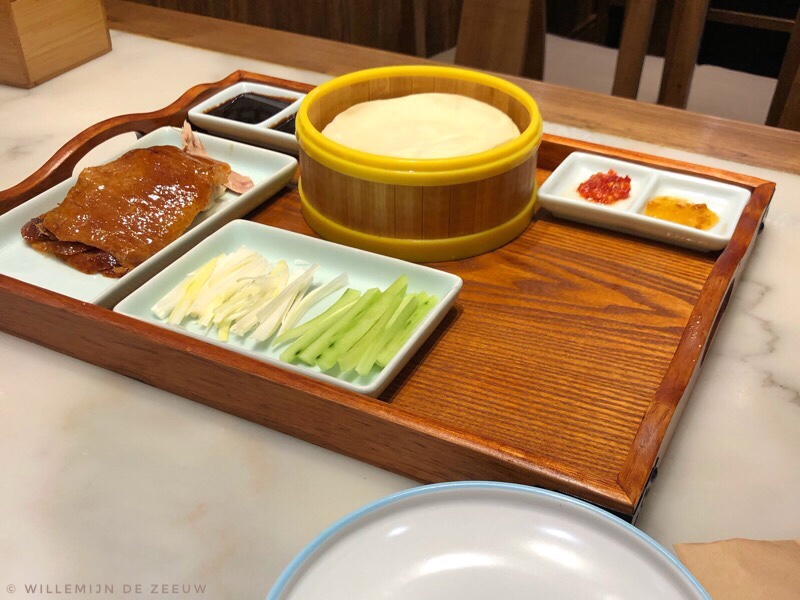 One thought on “Holland to Hong Kong travel journal #11: avoiding the crowds at the Great Wall and the Forbidden City”