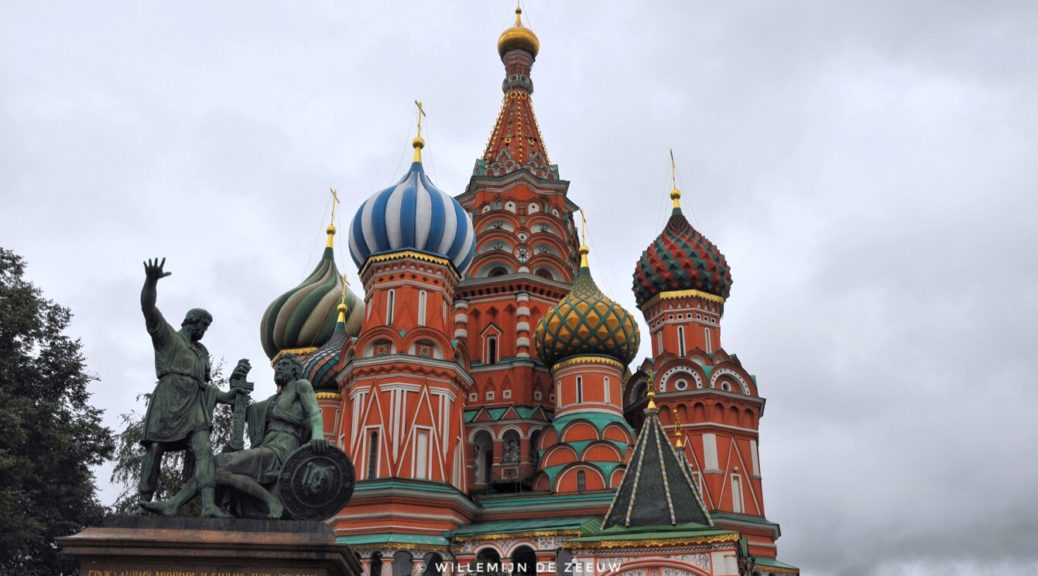 When the plans for my trip were made, it became clear pretty quickly that I would have only one day to explore Moscow. In order to make the most of that day, I planned it all out in advance.

I wrote the itinerary in my travel journal, including the relevant metro lines and stations in Cyrillic. I made sure to learn the Cyrillic alphabet prior to my trip, which proved to be very useful. I started the day by taking the metro from my hotel to Театральная. Taking the metro in Moscow is worth the trip just for the beauty of the stations, particularly the older ones in the city centre, which look like rooms in a palace rather than a public transportation system.

St. Basil’s catherdal and the Kremlin

I walked to the Red Square from the station. Expecting a large open space, with views of the Kremlin walls and St. Basil’s cathedral, I was quite surprised to see the whole square filled with a temporary structure. Turns out there’s a large military show at the end of the week. After walking past all of that, and peeking through the fence to see the performers practice, I arrived at St. Basil’s cathedral. It was incredible to see this iconic church with my own eyes. Sadly, my planning didn’t allow for me to go inside, as the ticket office doesn’t open till 11:00 and the queues tend to get very long.

I did, however, have a ticket to visit the Kremlin. I walked around the outer walls, along the river, to Alexander Garden. The queue outside the ticket office was ridiculously long. Thankfully, I had already bought a ticket online. The queue to exchange my e-ticket for a real ticket was much shorter, and moved along much quicker. 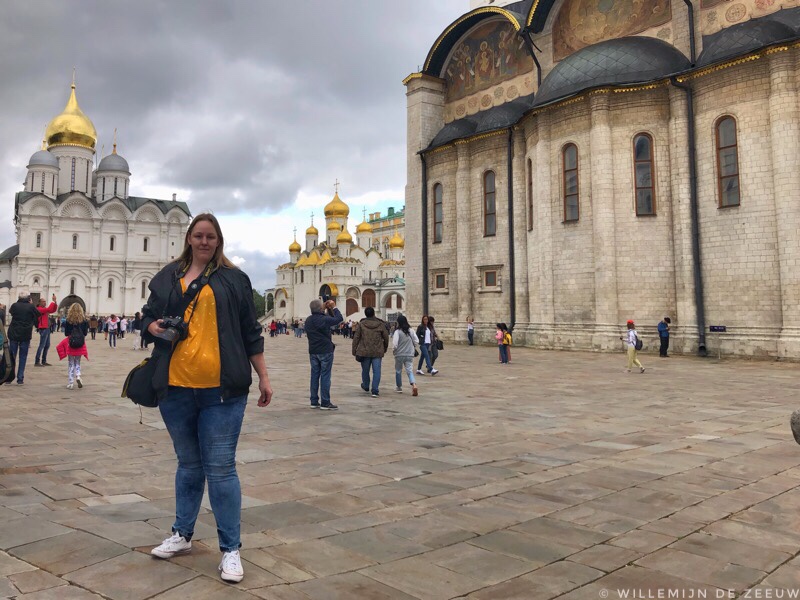 Once inside the walls, my ticket gave me access to “the architectural complex of the cathedral square”, which basically means you get to walk around in the square and visit the cathedrals that surround it. It’s quite bizarre to see that many cathedrals together in one place. After visiting two of the cathedrals, I took the obligatory pictures at the ridiculously oversized Tsar cannon and bell.

As it was nearly lunch time, I headed over to the shopping mall on the opposite side of the Red Square, called ГУМ (“GUM”, pronounced “goom”). Built in the 1890s, this mall still seems to have the atmosphere I suppose it would have had when it first opened. It is full of expensive shops and the architecture is so grand you don’t know where to look first. At the centre of it all is something that draws the eyes of all visitors. The large fountain, which is surrounded by ice cream and fruit stalls, is full of melons. I suppose it’s a way to keep the fruit cool, but it’s also very effective marketing. After all, how could anyone leave without buying cup of freshly cut fruit, or a melon flavoured Russian ice cream? I went for the ice cream, which comes out of the freezer as a pre-scooped perfect sphere, already on its cone. 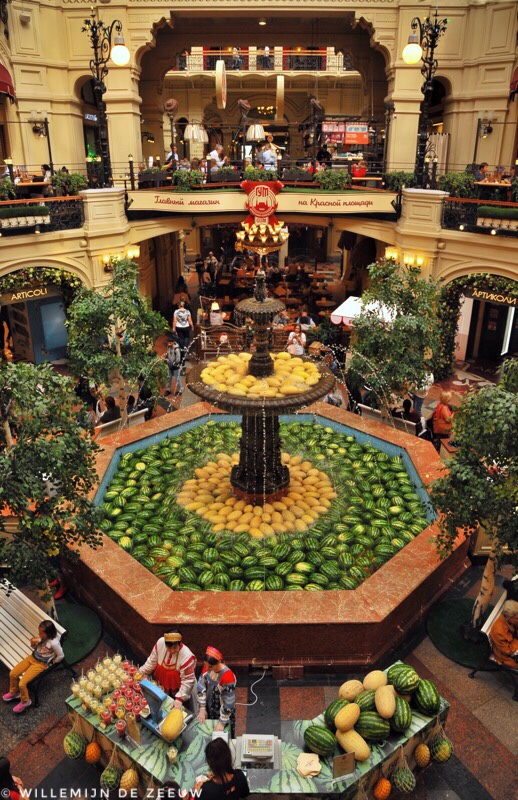 Another trip on the metro brought me to Park Pobedy (Victory Park), which is a large park built to commemorate the sacrifice, but also to celebrate the victory, of the Great Patriotic War, as WW2 is known here in Russia. The wide lane towards the main building is an impressive sight to see. Sadly I didn’t realise the museums were closed that day, as I would have liked to visit them. Instead, I went back to the city centre, to another park, surrounding a museum. It serves as a sculpture park where a collection of Soviet era statues has been placed that were taken down from their original locations. Seeing them all together in one park was rather bizarre. The park is right on the riverbank, which also makes it the perfect place to see the enormous statue of Tsar Peter I. 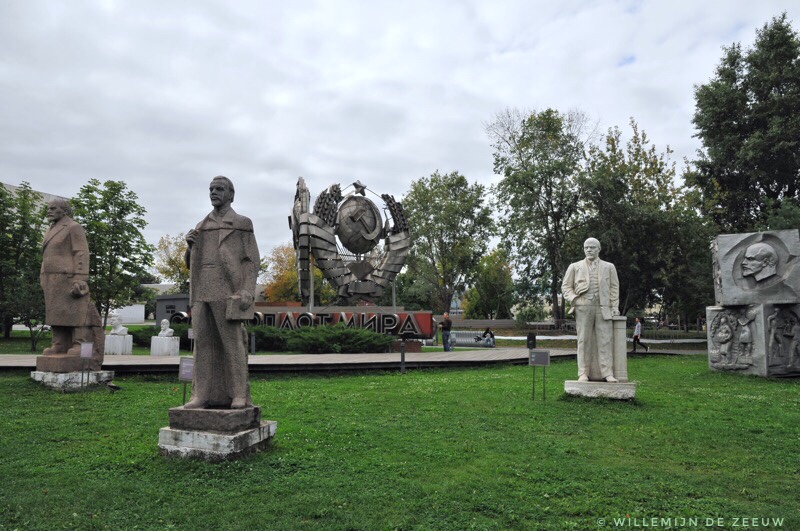 My last stop for the day was a market on the eastern side of the city. Surrounded by some rather tacky looking buildings that reminded me of an abandoned theme park, Izmailovsky Market itself was actually pretty good. The stalls were full of souvenirs at different price ranges. The salesmen were very friendly, and very chatty. I bought some souvenirs at one stall and had a great talk with shopkeeper Vladimir, even though the language barrier made it a little difficult. 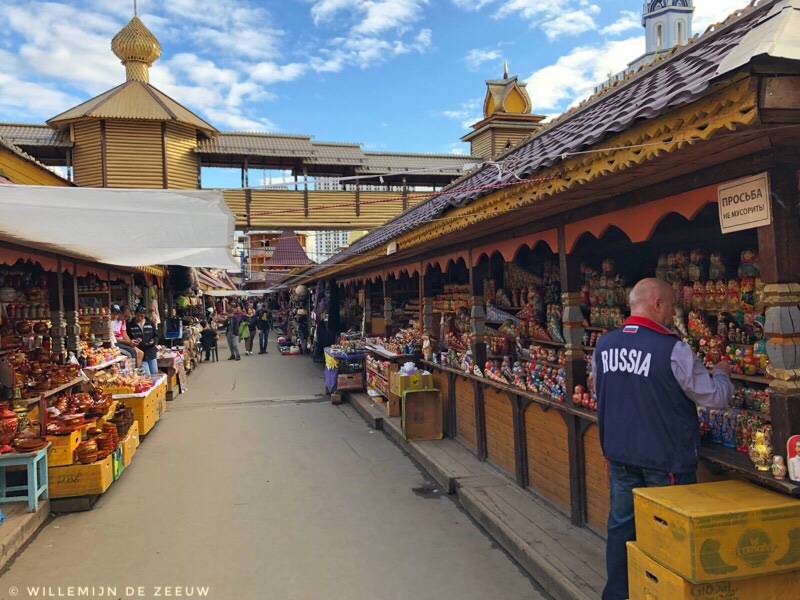 After returning to the hotel, I decided it would be a good idea to go to a restaurant, as my diet for the next 4 days would consist mostly of noodles, biscuits and crisps. Dmitry had recommended a Georgian restaurant across the corner from the hotel. Russians seem to love Georgian food and I now understand why. They don’t seem to adhere to the western idea of starter-main-dessert, so I simply received the three dishes I ordered as soon as they were ready. The restaurant’s decor was incredibly tacky, but the food was great, and very cheap. The bill added up to less than €15.

Tuesday morning the time had come to repack my bag and to go grocery shopping for the next leg of my journey: four nights on the Trans-Siberian Railway.

At the time of posting this blog, I have just arrived at Lake Baikal. I hope to write about my train journey very soon.