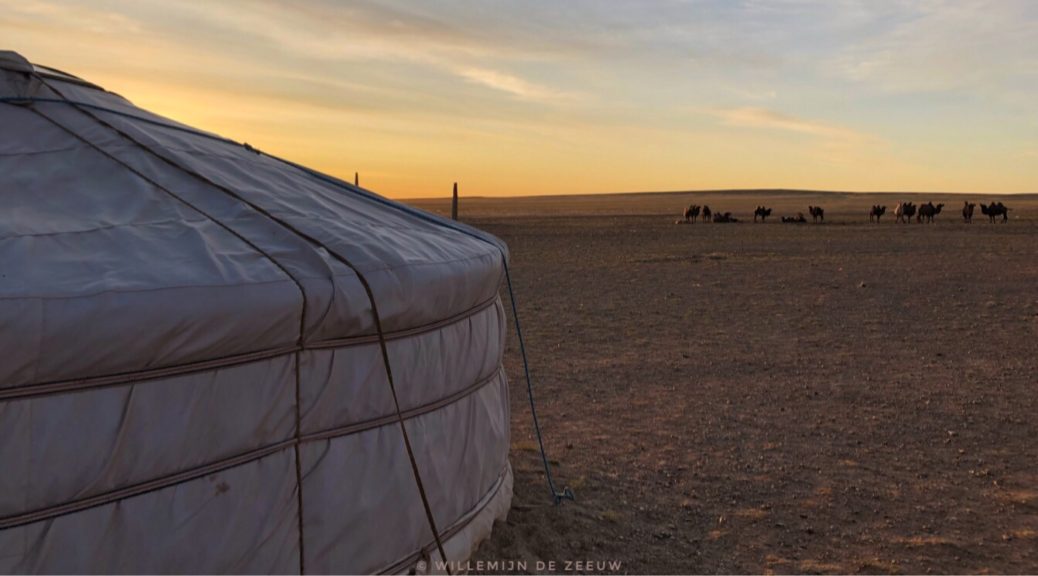 Last week, I travelled to the south of Mongolia on a week-long guided tour. Along with the guide, two drivers and 7 other travellers from Holland and Belgium, we set off from Ulaanbaatar in 2 Russian 4×4 vans, to explore the Gobi desert.

We travelled nearly 1700km in total, mostly on dirt roads. Our guide was very knowledgeable and the vans frequently stopped en route, so it was impossible to fit the whole trip into one blog. Here’s part 1, about the first half of the week. 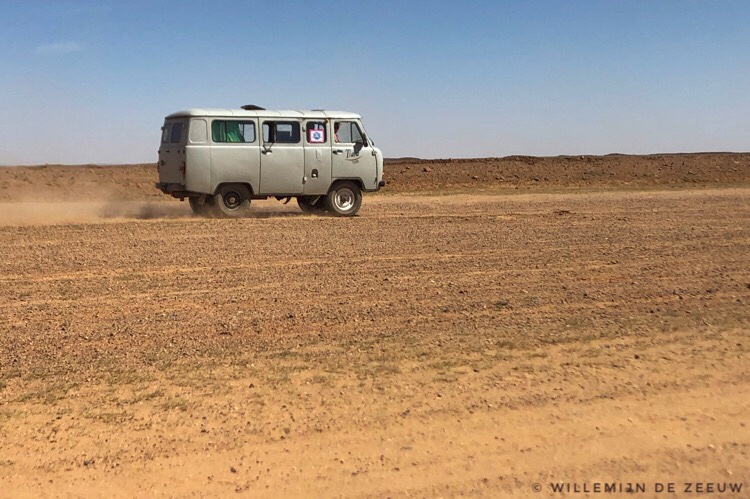 Before we set off into the vast and beautiful landscape of Central Mongolia, we stopped at a supermarket for some supplies. Stocked up on water and snacks, we were ready to head south. The landscape was surprisingly green. Our guide told us there’d been a lot of rain in August. In the afternoon the terrain turned more rocky. We stopped at a place of which the Mongolian name translates roughly to “rocks in a small place”. The granite rocks have been turned into the most beautiful shapes by wind and sand. Around the entrance of a cave, previous visitors had stacked rocks in various places, a custom that originates in Mongolian shamanism. Such rock piles are called “ovoo” and we would see a lot of them that week. 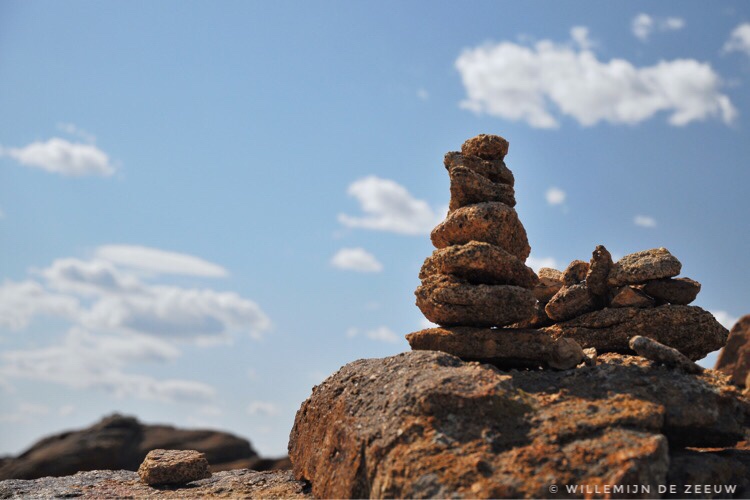 At the end of the afternoon we arrived at the first ger camp of the week. A ger is a traditional round Mongolian tent. This type of tent is still used by many nomads in the country. After having dinner and taking a much needed shower, I walked back to the gate. Away from the lights of the camp, it was unbelievably dark. There is so much light pollution where I live, that I’m not used to such darkness. The upside of this though, is that the night sky was an incredible sight to see. 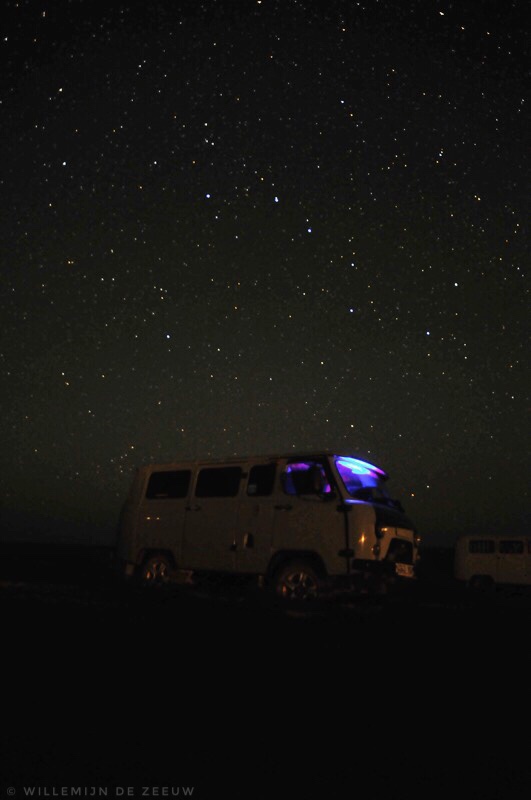 I had the added luck that there was a new moon that night, so there was no moonlight to spoil things. I have never seen so many stars in my whole life. Even the milky way was visible to the naked eye. My reason for walking all the way to the camp gate in the dark was to try to take photos, which wasn’t easy, because I didn’t bring a tripod, so I had to balance my camera on my bag and use the timer. Although the photos are quite dark, I’m pleased with how they turned out. Especially since this was the best night for it during the whole week. The other nights were either too windy or not clear enough. 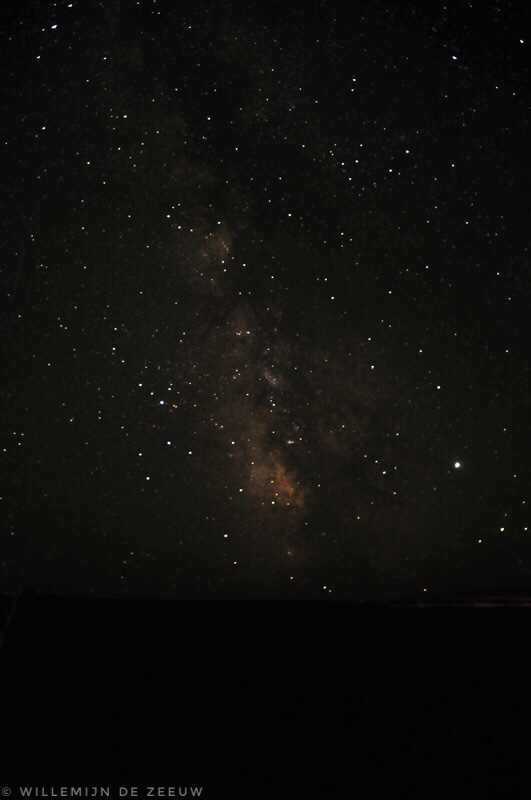 The next day, we stopped at the ruins of an old temple, near a small lake. In a landscape where water is scarce, the lake attracts many birds. After that, the landscape slowly became less and less green. When we came across a well, we took some time to watch the nomads taking turns to let the herds of sheep, goats and horses drink. When one of the horses got impatient, it made a run for the well. One of the men caught it with a lasso, which was fantastic to witness, because he had a bit of a struggle to calm the animal down. We stopped in a small town called Luus, for a surprisingly tasty lunch of fried noodles with mutton. In the afternoon we arrived at a viewpoint called White Stupa, named after the shape of the rocks. It was a very hot day, so when our guide suggested a walk that involved climbing down a small canyon, I opted to stay up at the viewpoint instead, and wait for the others to return.

That night we would be staying with a real nomad family. They have set up some extra gers behind their own, for tourists to stay in. The experience of staying with them was really special. They welcomed us in their own ger with a cup of milk tea. We then got the chance to try a traditional Mongolian drink: fermented camel milk. Similar to Mongolia’s most famous drink Airag (fermented mare’s milk), it is quite thick, slightly frothy and rather sour. Needless to say, most of us didn’t like it, but it was nice to have the opportunity to try it. Much less popular was the plate of boiled sheep offal that was passed around next. I took a small piece of liver, mostly to be polite. I didn’t really enjoy the taste, but the other options, such as lung, didn’t appeal to me very much.

I didn’t sleep very well that night. The beds weren’t much more than thin mats on wooden boards, and there were mice in the ger. Unlike the previous night at the tourist camp, where I’d had my own private ger, I had 3 roommates. In the morning I asked them if anyone else had heard the mice, and one of them said “oh yeah, it was in the blue bag and I closed the zipper”. Apart from nibbling on an apple, the mouse had spent most of the night scratching the inside of the bag, which is the noise I’d heard. After setting the mouse free, we said goodbye to the nomads and continued south, to Dalanzadgad. Our guide was in the other van for this part of the trip, so I had the opportunity to sit in the front passenger seat, from where I had the perfect view. Apart from a quick stop to watch a herd of camels at a small watering hole, the day was quite uneventful. We were meant to go hiking in the afternoon, but since it was much less likely to see wild animals in the afternoon, we’d chosen the option of getting up very early the next day, so we could do the hike early in the morning. We stopped for groceries and for lunch in Dalanzadgad. I picked buuz (steamed mutton dumplings) which turned out to be the best lunch I had all week. 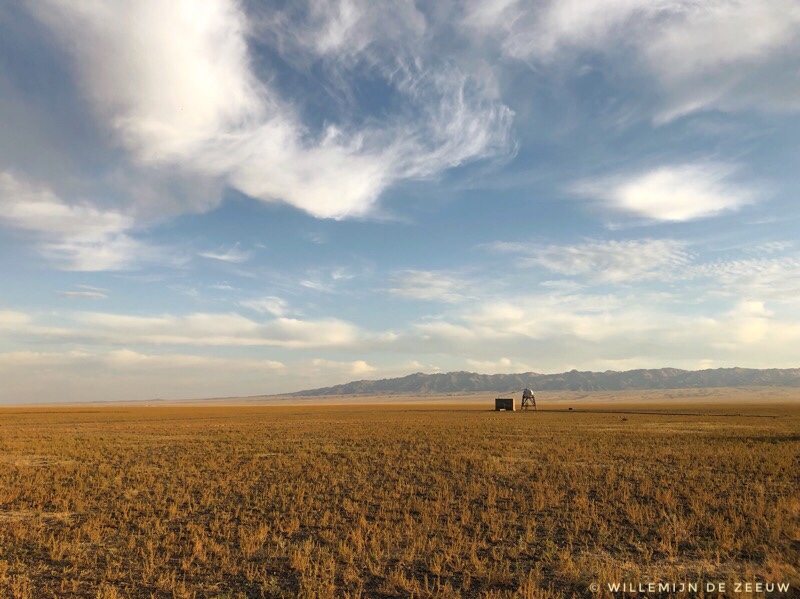 Soon after Dalanzadgad, we arrived at the ger camp. Despite it being a tourist camp, it was a lot more basic than the first night. There was only electricity for a few hours in the evening, when the generator was running. Before taking a hot shower, we had to ask the camp staff, so they could make a fire to heat the water. Thankfully though, I slept much better than the previous night.