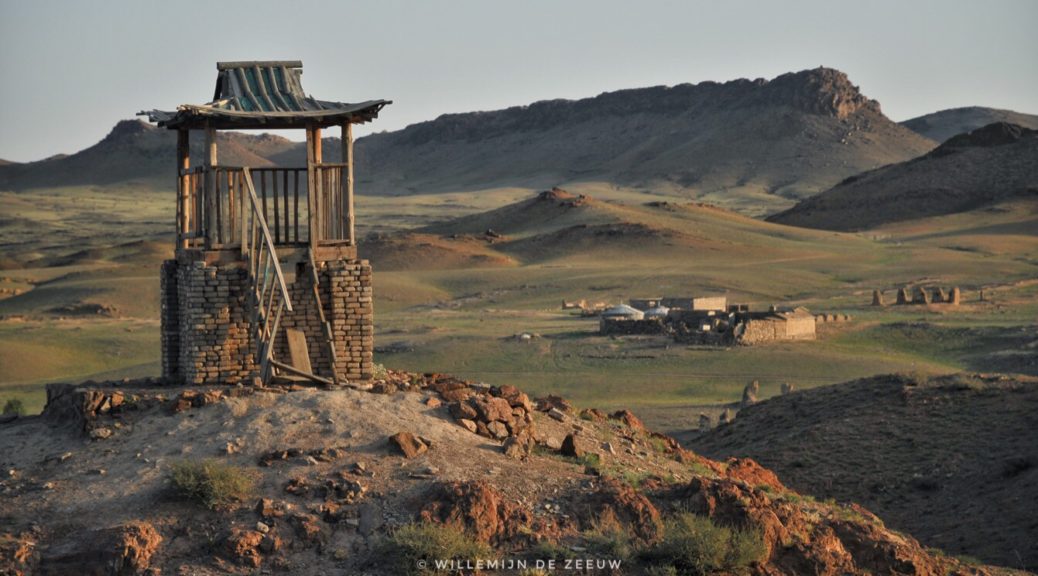 The second half of the Gobi desert tour turned into a little bit of a safari. We went in search of mountain goats on a morning hike in Gobi Gurvansaikhan National Park, and tried to find wild horses in Hustai National Park.

The ger camp just outside Dalanzadgad marked the southernmost point of our Gobi desert tour. It was the fourth day, time to head back north. Before that though, we had a morning hike planned. After an early breakfast at the ger camp, we left for a valley called Yolyn Am. This valley used to have a permanent glacier, but in recent years it has all melted by the end of summer, so we didn’t see any ice. Nevertheless, the area is perfect for hiking. Arriving early would give us the best chances for wildlife spotting. The name of this valley translates to “Eagle Valley”, but we wouldn’t be seeing any eagles. The animals we were keeping an eye out for were Gobi Ibex and Bearded Vultures. The hike into the valley was about 2,5km, during which we were constantly crossing a small stream, going back and forth to find a good path. We weren’t lucky enough to see any ibex, but we saw plenty of vultures. At one point we even saw a group of 6 or 7 of them circling above the valley. Another animal we saw plenty of, was the Mongolian Pika. I thought they looked really cute, almost like a cross between bunnies and mice, with their round bodies and round ears.

After our hike, we visited the museum, which was only worth it for their display of dinosaur egg fossils. Mongolia is where the first dinosaur eggs were found, in 1923. Apart from the section on dinosaurs, the museum houses a frighteningly bad taxidermy collection. Especially the snow leopards looked like the stuff of nightmares.

We had a long day of driving ahead of us, mostly on dirt roads again. We made a brief stop at a small area with trees. We hadn’t seen any trees so far during our trip. If a sapling would even survive the climate here, it wouldn’t stand a chance against the sheep and goats that would eat it. These “Gobi trees” are protected though. We even came across large fenced off areas where more of these trees are being planted. 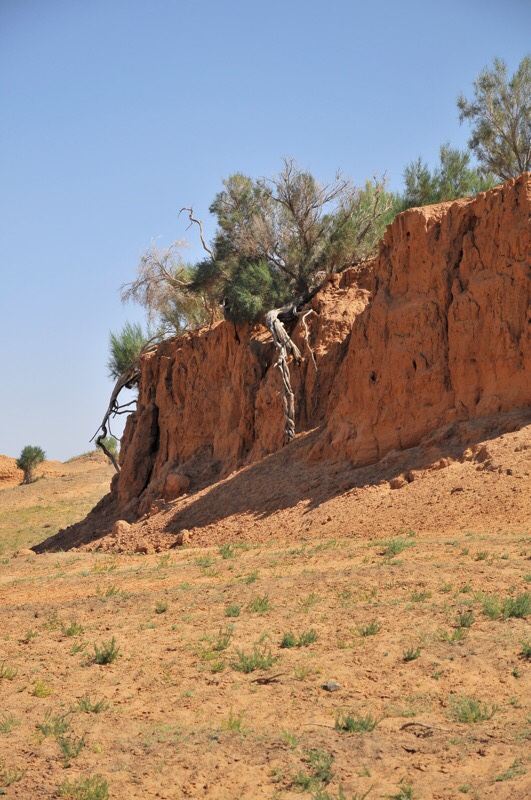 Since we wouldn’t come across a restaurant, the ger camp had provided us with a packed lunch. We stopped in a very open area, and the only solution against the heat was for all of us to sit down side by side in the narrow shadow of the van. The ground was radiating with heat though, so we didn’t stay for long. When we arrived in our ger camp for the night, we had some time to get settled into our gers, before we would walk to a nearby monastery. Located on the other side of the hill behind our camp were the ruins of Ongiin Khiid. At it’s prime, it was one of the largest monasteries in Mongolia. In 1939, when the Communist Party sought to wipe out all forms of religion in the whole country, dozens of buildings at Ongiin Khiid were destroyed and 200 of its monks were killed. Mongolian Buddhism still hasn’t fully recovered from this, but one of the temples has been rebuilt and is currently in use as an “inactive” monastery, which means monks chant here on special religious days, but not every day. 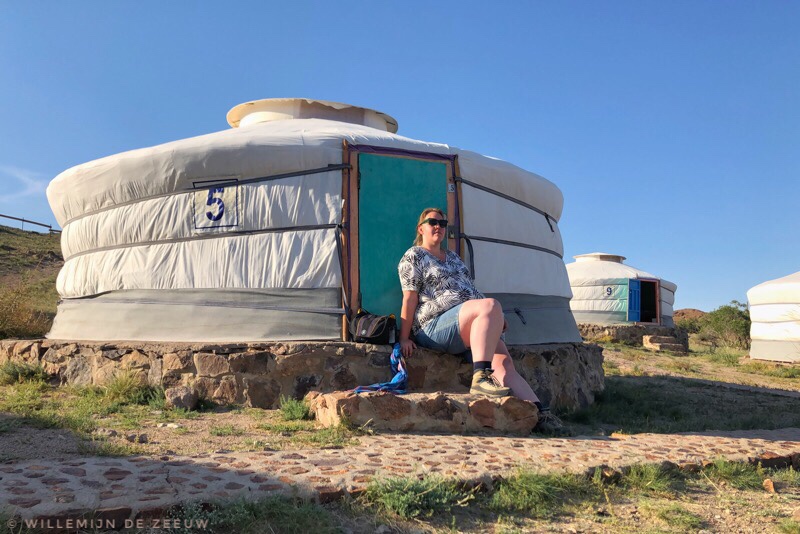 Back at the ger camp, I spent some time taking photos. When I was about to step back into my ger, I wanted to put my camera back in its bag, but it somehow slipped out of my hands. I saw it fall in slow-motion, unable to stop the inevitable. With a sickening crack it landed on the concrete. I picked it up with shaking hands, because I was terrified the lens would be broken. After years of postponing the purchase, I had finally bought a rather expensive new lens just before my trip. A broken lens would mean that I would only have my phone camera for the rest of my trip. Thankfully the lens didn’t have a scratch. It looked like the sun hood had saved it. However, the camera body didn’t have the same luck. It seemed to have landed on the top right corner, near the top lcd screen. The aluminium body was cracked, something that would be impossible to repair. I was (and still am) devastated to see the damage. When I looked through the viewfinder, I saw a large black spot in the middle. I made a few test photos, and miraculously, the spot didn’t show up on the photos, so I supposed it must be on the mirror. I didn’t want to risk taking a look in the dusty environment of the camp, and since it didn’t show up on the photos, I decided not to touch it. Sadly though, the fall seems to have done some internal damage as well, as the top screen no longer lights up, and it is now impossible to switch off the camera, except by removing the battery. Despite everything, I am really happy that I can still take photos with it, but I guess I’d best start saving money for a new camera… 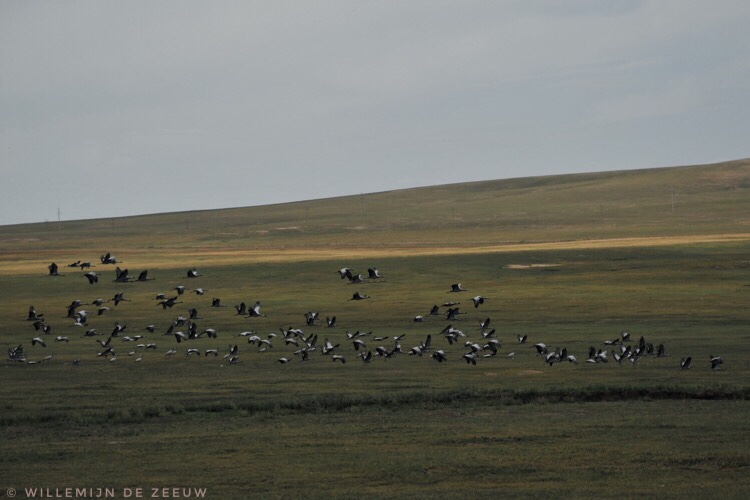 On day 5 we travelled to Kharkhorin, which is next to the ruins of Kharkhorum, an old capital city of the Mongol Empire, under Genghis Khan’s son. During the long drive there, we didn’t have many stops. We did stop when our driver spotted a large flock of birds. The birds, which turned out to be Eurasian Cranes, took flight as soon as we stepped out of the van, but I miraculously managed to take a quick photo when they did.

We visited the museum at Kharkhorin, where we learnt about the empire and about the imperial city. The ruins of Kharkhorum are a part of a large area protected by UNESCO. We also visited the Erdene Zuu monastery. Unlike the other monastery we visited, this is an active monastery. Monks live here and chant every day. The outer wall contains 108 stupas, a sacred number in Buddhism. The same communist purge that destroyed Ongiin Khiid nearly destroyed Erdene Zuu as well, which is still visible by the large amount of empty space inside the wall. However, before everything was destroyed, some of the buildings were turned into a museum. This saved the monastery from further destruction, and after the fall of communism, it became an active monastery again. 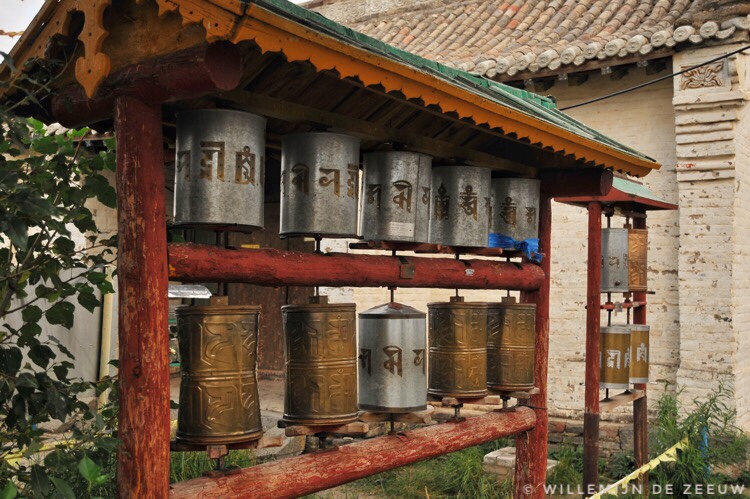 The last night of our tour would be spent with another nomad family, who live in Hustai National Park. However, before we got there, we had another long journey ahead of us. we spotted many eagles along the way, but they were impossible to photograph from inside the van. The washboard roads rattled our bones and everyone was glad to get out of the van when we made a stop at some sand dunes. This landscape meets the typical image people have when they think of a desert, even though the majority of the Gobi desert looks nothing like this. The climb to the top of one of the dunes was incredibly tough, as you slide back almost as quick as you can climb. Taking ten steps to move forward about a metre, I eventually made it to the top, and was awarded with a great view. 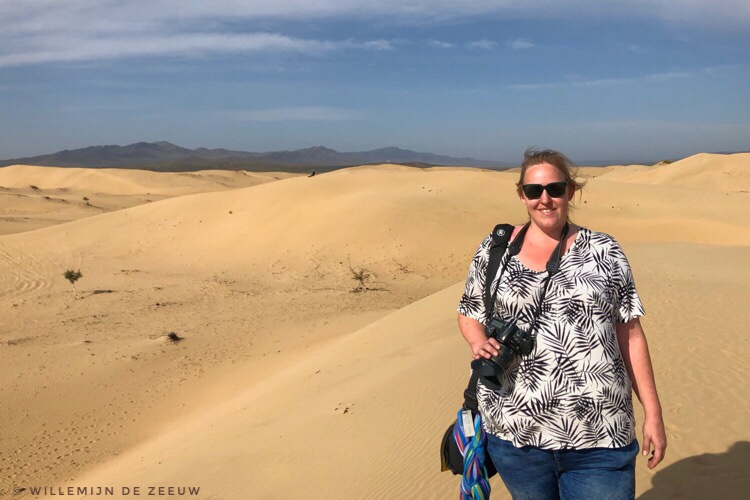 After spending some time to take photos, we moved on to Hustai National Park. When we arrived, we spent some time at the museum first, to learn about the history of the park and the reintroduction of wild horses in Mongolia. The Przewalski’s horses, called Takhi in Mongolian, were once extinct in the wild. With the help of a Dutch couple, a program was started to breed the horses that remained in zoos, and to reintroduce them in their natural habitat in this national park. In the ger camp next to the museum was one special ger, with an attached bathroom. This was built for the official visit of the Dutch crown prince Willem-Alexander and Princess Máxima in 2006.

After waiting an extra half-hour for the day’s heat to subside, we set off into the park to see if we could find some of the horses, or perhaps even other wildlife. Along the way, we spotted many marmots. When we came to one of the parking spots, there were a lot of people with binoculars, looking at the top of a hill in the distance. There was a small group of horses on the hill, but they were so far away that they could only be seen through binoculars. We were told that there was a good chance the horses would come down from the hills when it got a little cooler, so we stood and waited. I was sceptical about the horses coming closer, since there were now quite a lot of people, who of course couldn’t keep quiet. Surprisingly though, the horses did eventually descend from the hilltop, and we got an excellent opportunity to take photos. 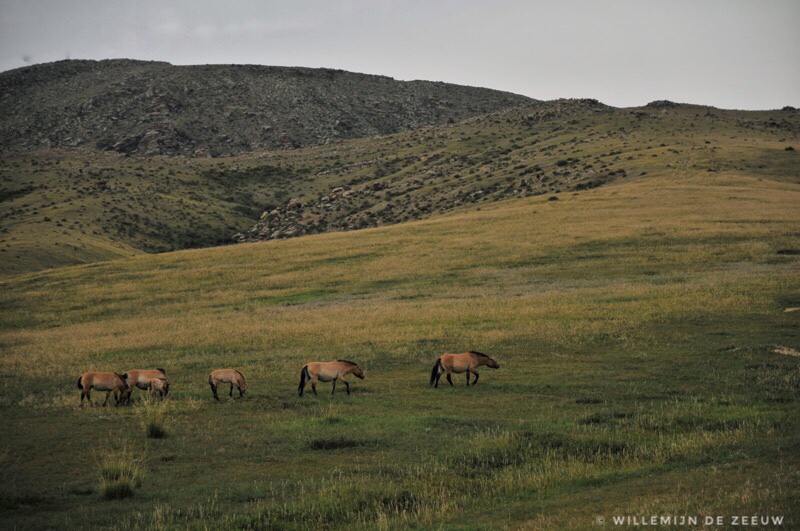 After the horses retreated back into the hills, we moved on to our final ger camp of the week. We were once again staying with nomads, but these nomads lived in a much nicer location than the family we visited on the dusty plains earlier that week. The gers were set up close to a natural ford in a meandering river. A man on horseback was leading his cows across the river. This family even had a cat, which was clearly effective against mice, as we didn’t hear any that night. Unfortunately, my stomach did not agree with the fried noodles I’d had for lunch, so I hardly touched my dinner. Eager to help me feel better, one of the women of the family made me a bowl of overcooked white rice, including some of the cooking water. The soft rice is easy to digest and the rice water helps to settle an upset stomach. I quietly sipped the steaming hot water as the rest of the group played a game with traditional Mongolian game pieces: goat and sheep’s ankle bones. 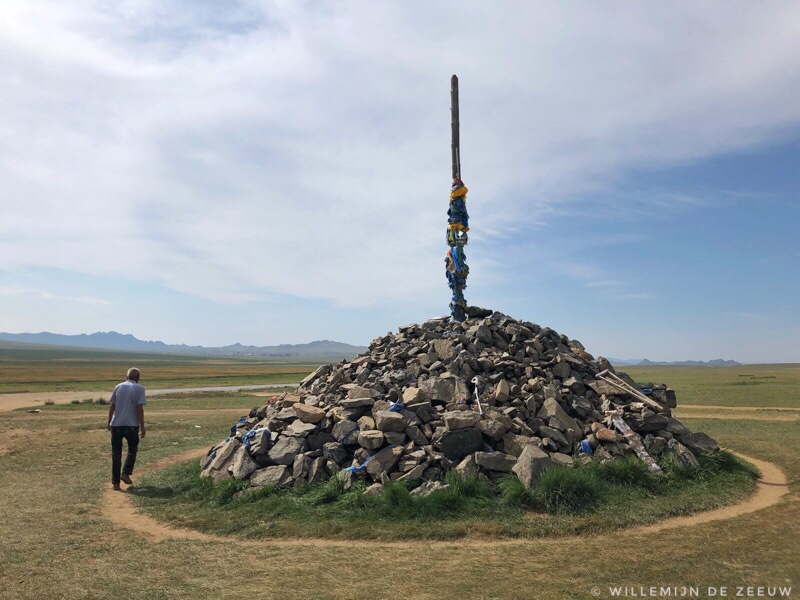 When we left the nomad camp in the morning, to drive back to Ulaanbaatar, we were lucky enough to spot some of the park’s wildlife once more. Running parallel to the vans, but higher on the hill was a small group of deer. I tried to snap some photos before they disappeared, but they were too far away. On our way to the city, we made one last stop at a large ovoo by the side of the road. Traditionally, people walk around these in a clockwise direction three times, which is said to ensure a safe journey. Even though we were at the end of our journey through Mongolia, we walked anyway, as we would all travel onwards to China the next day.