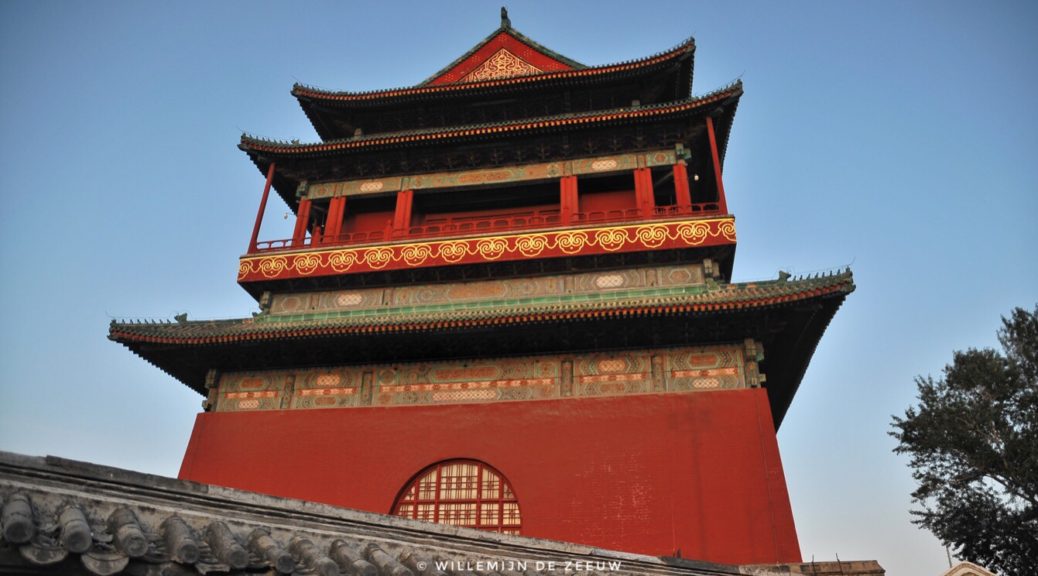 After a great week in the Gobi desert, it was time for me to leave Mongolia. The last leg of my Trans-Mongolian railway journey would take me from Ulaanbaatar to Beijing in about 30 hours.

Staying in the desert almost seemed like taking a holiday from my travels. When I got back on the train, I felt a little bit sad that this would be my final night in a 4 bed coupe. I wondered whether I’d have any Mongolian or Chinese roommates, but the train wasn’t that busy. I had the coupe all to myself.

The border crossing between Mongolia and China was the longest and most annoying one on the whole journey. After spending an hour and forty-five minutes on the Mongolian side, the train took about half an hour to move to the Chinese border crossing at Erlian, where it stopped for five hours. All passengers were herded into the station, with all of their belongings, to go through customs. It was the most thorough check so far, which even included fingerprint scanning. The entire process went fairly efficiently and didn’t actually take that long, but that’s not why this stop is five hours long. The real reason for the lengthy stop at the border is the train track. Mongolia and China don’t use the same track gauge. Instead of having a Chinese train ready, the bogies are swapped out on all carriages. In the past, passengers could stay inside the carriage for this process. Sadly, that’s not the case anymore. Since the border crossing is late at night, we all had to wait inside the station until well after midnight. With only one small shop and no restaurant, it was a long wait. I was quite glad I could spend it with the people I’d met on the Gobi tour, because sitting around with nothing to do would’ve been much harder on my own. 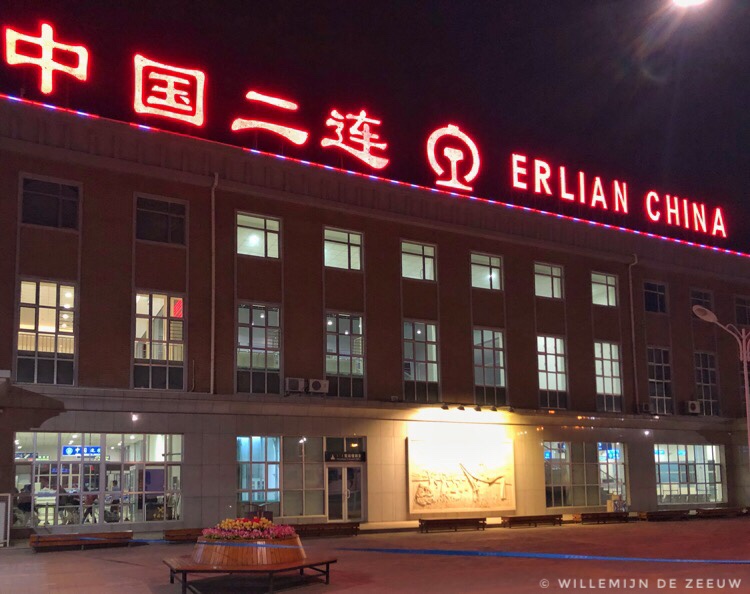 When we finally got to go back on the train, I quickly fell asleep. I thought I’d get some extra hours of sleep in, because the train wouldn’t arrive in Beijing until half past two. However, when I woke up shortly after sunrise, I was unable to get back to sleep. When I opened the curtains, the world outside the train had changed completely. Gone were the endless grassy hills I’d seen in eastern Mongolia. The difference in population density was incredible to see. There was a lot of farmland. Small villages with unsightly hills covered in solar panels. Cities with long rows of identical apartment buildings. There wasn’t much to look at, until about 300 kilometres before Beijing. In the distance, along the bottom of a hill, I could see a part of the Great Wall. It soon disappeared over the top of a hill, but to me it was a magical moment. Travelling here has been one of my biggest dreams for many years. As I saw the Great Wall of China from the window of my little coupe, the penny finally dropped. I’m not just traversing the globe, I’m fulfilling a life-long dream. I realise how lucky I am to be able to do that, and I couldn’t be more grateful. 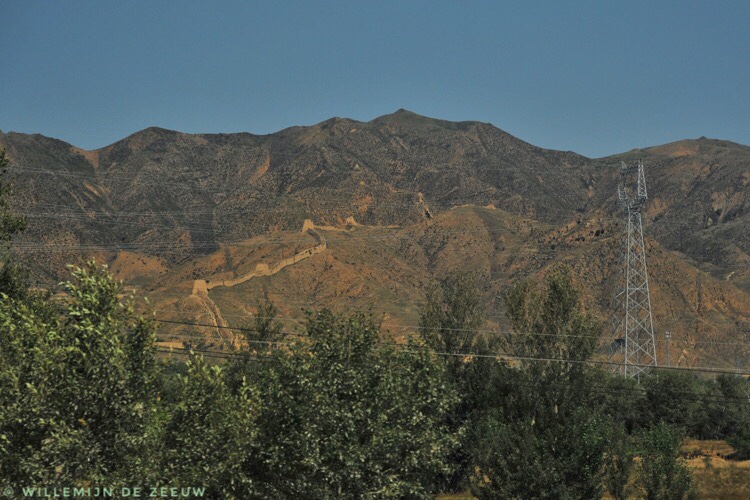 After the hills, the landscape changed once more, to my absolute favourite: mountains! The final stretch of the track towards Beijing passes through 60 tunnels. The tunnels are numbered, which make them a fun count-down to the Chinese capital, and between the tunnels, the views are stunning.

Upon arriving in Beijing, I was immediately thrown into the mad chaos of this city. As hundreds of passengers made their way through the station, I looked for someone holding a sign with my name on it. After some confusion with my fellow travellers (who were staying elsewhere in the city), I found the guy and after saying goodbye to the others, I was driven to my hostel. 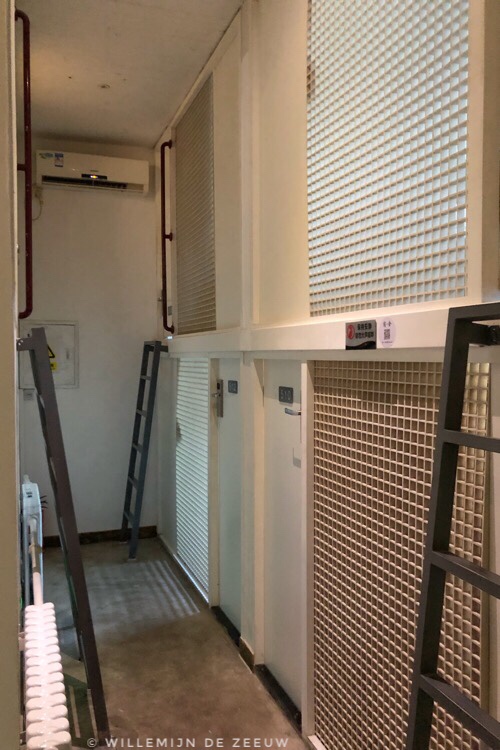 This hostel was the one I was most curious about. I was staying in a capsule room. It’s not as tiny as some of the Japanese style capsule hotels I’ve seen, but it was definitely the smallest room I’ve ever stayed in. The room was about 1.75m tall and only about half a metre wider than the single bed that was in it. There are two layers above each other, and my room was on the top layer. Apart from the terrible struggle to get my backpack up here, I loved my little room. I wouldn’t have wanted to swap it for a bunk bed in a dorm. Not in a million years.

To celebrate reaching the end point of the Trans-Mongolian route, I went out to find a restaurant for a nice meal. China has one of the best cuisines in the world, and I was excited to try as much of it as my 4 nights in Beijing would allow. After walking past the Drum Tower and Bell Tower, I wandered into one of the many old alleyways called hutongs that can be found in this part of the city. It was fantastic to walk through the small streets, see the wonderful architecture. Many locals were sitting on plastic chairs outside their front doors, their eyes following me curiously as I walked a route that most tourists seemed to be missing. 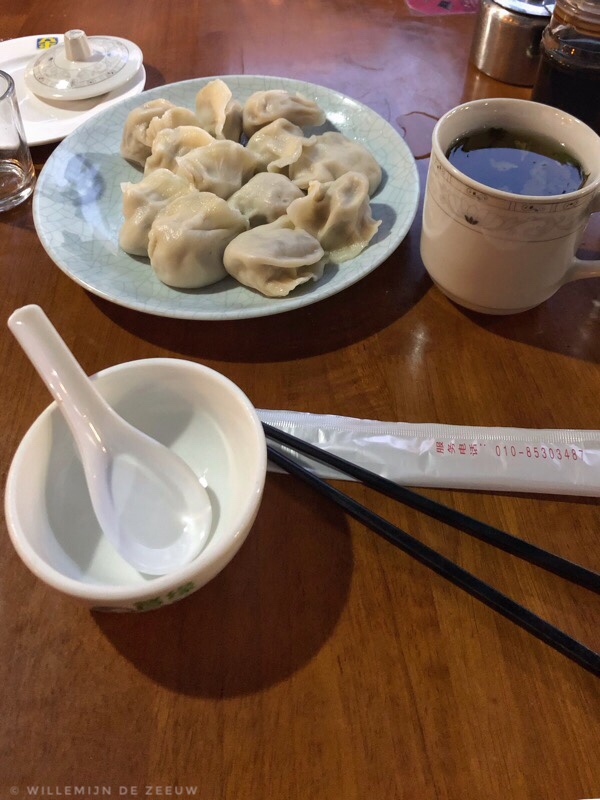 When I found a small dumpling restaurant in a side street, I knew I’d found the right place for my celebratory dinner. There were too many options to choose from. I ended up ordering two types of dumplings, beef with mushroom, and pork with lotus root. Both of them tasted incredible, but the pork dumplings were my favourite. During dinner, the sun went down over the small courtyard, as I sipped on my steaming hot cup of jasmine tea. It couldn’t have been more perfect.