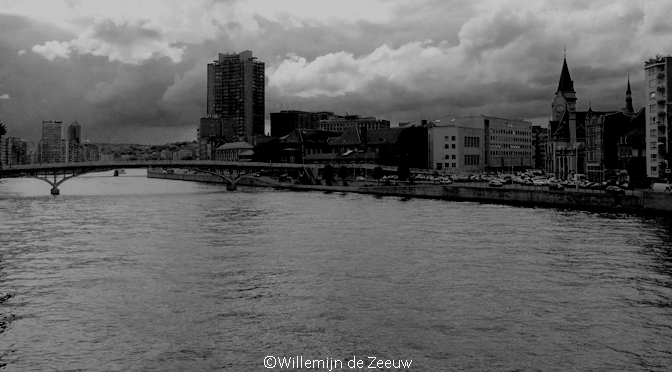 It is usually a great idea to go on a trip without doing a lot of research beforehand. It is a great way to discover new places and it provides even a simple day trip with a hint of adventure. Sadly though, this philosophy tends to backfire once in a while. Let me tell you about my recent adventure in the Belgian city of Liège.

Together with my friend Angelique, I set off from a small town in the south of Limburg, to visit the city of Liège (Luik). We did not have much of a plan. There were some sights I wanted to see and some shops we wanted to visit. I had never visited Wallonia, the French-speaking, southern half of Belgium before. I had no idea what to expect at all.

My first impression of Wallonia was good. I loved the scenic drive on the motorway along the bank of the river La Meuse (Maas). The quality of the roads was terrible, but the views were stunning. Even though none of the buildings we saw along the way are worthy of the word architecture, it was great to see how different from The Netherlands it all was. Now that country borders do not really mean much anymore in most of Europe, it pleases me to realise that I do still instantly get that feeling of being abroad, when the style of the houses and the road signs change.

Upon entering the city, we both immediately felt like it did not really radiate a good vibe. Traffic slowed down to a crawl as we passed several crowded flea markets. Pedestrians weaved through the slow-moving traffic to cross the street. Our first stop would be a music shop on the Chaussée des Prés, in the middle of the city. After we finally found a spot to park the car in the busy street, I asked someone if I was allowed to park there. He assured me that I was, as long as I paid for it, which I had.

As we walked to the shop, the bad vibe of the city only got stronger. Angelique even told me that she felt like something wasn’t right about this area, even though she couldn’t quite put her finger on it. I found myself agreeing with her. The small restaurants and shops reminded me of a street in Marrakesh, rather than a city in Belgium. The plethora of abandoned shops and broken windows did nothing to ease our minds. Little did we know that the people who lived in these decaying streets were actually going to be the least of our worries.

The half hour spent in the music shop can easily be described as the highlight of our day. To our great amusement, the staff were very inquisitive about Angelique’s guitar. They were very friendly and had no trouble speaking English. They told us about Les fêtes du 15 Août. Even though no one seemed to know what the celebrations were actually about, they did convince us to come back there later in the day to partake in the festivities and enjoy the live music. We were having a great time, right until someone asked, “where did you park your car?”

The moment we left the shop, I immediately felt my heart sink, as we had found the adventure we weren’t looking for. A police motorbike was now parked in the spot where I had left my car. Several tow trucks were waiting in line to remove all other cars from the same street, in preparation of that night’s festivities. We asked one of the drivers if he knew whether they had taken a black Astra with Dutch plates on it. He shrugged and gave me a card. “You have to go here”, he told me, before continuing to tow away the next car.

We walked straight back to the music shop, hoping to get some help. When we walked in, the guys realised what had happened straight away. They tried to help us by printing a map and finding out whether we would be able to reach the address on the card by bus. It soon became clear we were better off taking a taxi. Utterly devastated about the surreal turn of events, we had to take a moment to let it all sink in. We sat down for a quick drink on the square before walking toward the bus station, to find a taxi.

As we crossed the river, the view from the Pont des Arches bridge was actually alright despite the gloomy weather, but I didn’t see it. I was on a mission and wanted to rescue my car as soon as possible. A very friendly taxi driver dropped us off at the address on the card, where it promptly started to rain. I guess it would be best if I did not go into the details of the infuriating process of getting my car back. Half an hour and €220,- later, I had my car back and was dying to get out of this dreadful city.

As far as travelling goes, this has been my worst trip to date. The remainder of our day was saved by a visit to a hypermarché (miles away from Liège) and finding a location for a quick photo shoot. The location wasn’t much more than a pile of rocks by the side of a road, but I managed to take some great photos of Angelique and her guitar. Apart from those photos, I barely took photos at all during the entire day. The only souvenir I have from this terrible day , is a good story, and the knowledge that one day I will laugh about this. I am sure that even if I do ever find out what the 15th August festivities are really about, they will always remind me of that time in Liège when my car got towed.

I will be avoiding Wallonia in the future however, and that has nothing to do with my car. The sole reason for not wanting to ever set foot in Wallonia again, is because of the Walloons. With the exception of the taxi driver and the music shop’s staff, every single person there was so rude, it borders on hostile. They are annoyed by virtually everything and probably have no idea what it is like to smile. Tourists apparently deserve a death stare for everything they do, ranging from just breathing to paying for their overpriced coffee. If you’re thinking of visiting Belgium, I highly recommend you avoid Liège and go to Antwerp instead. I have visited Antwerp several times, and have loved it every single time. Trust me on this one.

All in all, I think our day is best summarised by the Dutch saying “een ervaring rijker en een illusie armer”. I have gained an experience and lost an illusion. Goodbye Wallonia, I will not miss you.

6 thoughts on “Travel journal: The 15th August Festivities (or: why I wish I had not gone to Liège)”