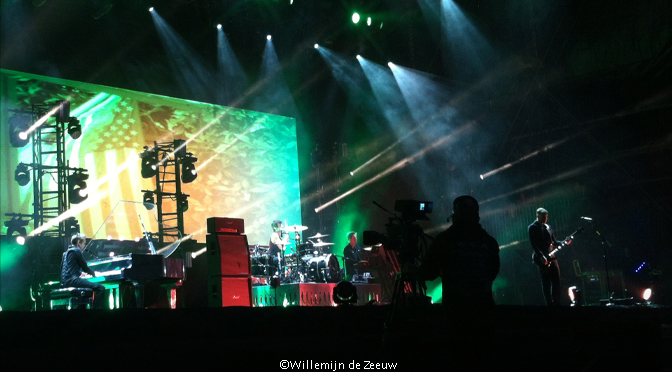 My first music festival experience was much like a rollercoaster ride. It certainly had its ups-and-downs, but it turned out to be an absolute blast. The months leading up to the event were absolute chaos, due to the fact that I was busy writing my bachelor thesis. The festival itself however, was the best graduation party one could ever hope for.

When Muse announced in November 2014 that they would headline three European festivals in the early summer of this year, I immediately wanted to buy a ticket. I’ve been a Muse fan for a couple of years now and I had been waiting for them to play a gig near me. The day the tickets went into presale, I immediately bought a ticket to Grüne Hölle Rock. The festival in question was to be held at the legendary Nürburgring race track. I’ve wanted to go there for years now, so I was very excited about this location.

The festival would take place during the perfect weekend. It was right after the week I had to hand in my thesis. I was looking forward to a weekend of travelling and good music, when everything about the festival changed. The location had changed to a football stadium in the city of Gelsenkirchen. At first I was hugely disappointed about the relocation. The main stage would be indoors, rather than outdoors, and the campsite was halfway across town, instead of right next to the venue. In the end though, I am glad things did not go according to the original plan.

I arrived at the campsite on Thursday. After a surprisingly good night’s sleep, I took the shuttle bus to the stadium and spent the day listening to several great bands. Halfway through the Metallica gig, I decided I needed to conserve some of my energy for the next day. The main reason I was at this festival, was to see Muse. It was raining when I walked out and when I arrived at the shuttle busses, one of the drivers told me he could not take anyone to the campsite. When I asked him why, he told me “there has been a hurricane on the campsite”. I could not help but laugh at this. I know the weather can be quite bad in May, but a hurricane? In Germany? I highly doubt it. Despite those sceptical thoughts, I have to admit I was nervous when I made my way back to the campsite by public transport. Would my cheap, little tent still be standing? Would it be as waterproof as one could expect a brand new tent to be? When I arrived at the campsite, I actually understood what had made the bus driver think of a hurricane. The campsite had been evacuated during a rather intense downpour. The field was absolutely soaked and several tents had not survived. I hurried to my tent, relieved to find it intact and dry.

The next morning I took the shuttle bus to the stadium at about half past ten. Convinced that I would be too late to be anywhere close to the front of the crowd, I walked towards the entrance. I was pleasantly surprised to find no more than 15 people queuing. Other people were hiding from the rain. It was at that moment that I started to feel butterflies in my stomach. Would I be able to make it to the front row? How long would we have to wait until we could go inside? I stood my ground in the pouring rain and was rewarded with a spot at the barrier a little over two hours later. Despite the fact that there were two entrances, I had made it to the front row. I looked like a drowned rat, but luckily there would be plenty of time for my clothes to dry.

After spending the day making friends with two fellow music fans from Holland, leaning on the barrier was starting to tire me. Nevertheless, the moment the intro to Muse’s Psycho blasted from the speakers, all tiredness left me. Fuelled by adrenaline, I sang along to the lyrics until I thought I had lost my voice. This was what it had all been for. The unpleasantness of the bad weather of the past 24 hours and the seemingly endless wait, both outside in the rain and inside at the barrier, were all more than worth it. It was not until halfway through the concert that I realised how incredible it all was. This was the first big concert I went to, and thanks to the rain I was standing in the front row. The butterflies in my stomach, caused by being so close to my favourite band, made me forget about everything else. The stress I had had while writing my thesis all faded away in the awesomeness of that moment. In more ways than one, the festival was a weekend of Butterflies and Hurricanes, and there is nothing that I would have wanted to change about it.