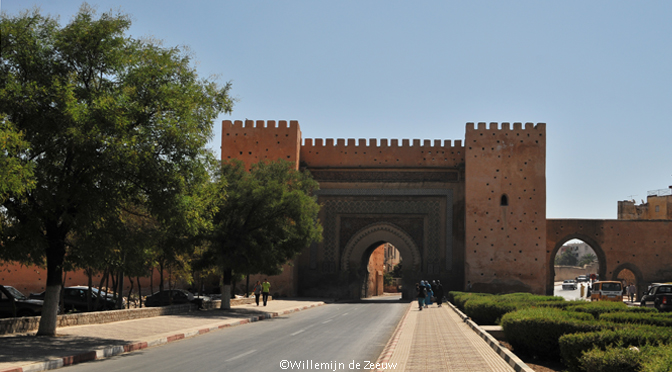 Not all my holidays consist of taking my car and my tent on a road trip. In a country like Morocco, I would not have felt comfortable to drive around on my own, especially not in the chaotic cities. Despite that, I did not want to spend an entire week in one place. When I decided to travel to the country of couscous and tagines in 2012, I booked a week-long guided tour of Morocco’s famous imperial cities.

Why would you go on a guided tour?

Most people I have talked about this trip with, have asked me this question. They do not understand why I would want to spend an entire week with a group, on a trip that has been completely planned out in advance. Although I agree that these kind of trips offer little to no time to do some exploring of your own, I do think this has been the perfect way for me to see this magical country. Let me tell you why.

I tend to squeeze as much sights and experiences as possible into a short holiday, because I know it will only last a week. After I return, I usually have to wait a full year before I can go on such a holiday again. When I was planning my time in Morocco, there were quite a few sights in at least three cities that I wanted to see. I realised that if I was going to do this trip on my own, my holiday would be just as planned out in advance as the week-long guided tours are. Due to my dependence on public transport, there would actually be a good chance that I would see and do much less if I wanted to do it all on my own. The guided tour I eventually chose, included all sights that I had wanted to include in my trip. Starting and ending in Casablanca, this trip actually included more cities and many more sights than my initial plans did.

The holiday turned out to be absolutely amazing. Our guide Idriss never bored us with his endless stories about the places we were visiting, and he offered us more extensive explanations during the long bus rides from city to city. The group was a wonderful mix of people from all over the world, from nearby Algeria to Lebanon and Brazil, and Idriss had no trouble telling his stories in several languages. There were so many sights to see, views to photograph, foods to try and shops to visit, that I found myself writing everything down in my travel journal several times a day, just to keep up with it all. The sights that I had wanted to see were exactly as I expected them to be, sometimes even better than I had dared to hope. The additional places we visited included a Kasbah covered in white and blue paint that exuded the atmosphere of what I imagine a Greek island to be like, the ruins of an ancient Roman city in the desert, and a breathtaking bus ride through the Atlas mountains. All in all the trip left me surprised by the diversity of this country, the most beautiful arts and crafts, the good food and the rich history.

Of course there is no such thing as a perfect week full of highlights, without any downsides. During my time in Morocco, there was one evening when I did not enjoy myself at all. As a part of our guided tour, we went to see something called Fantasia, not far from Marrakesh. We had been told Fantasia would be a traditional Moroccan dinner, along with a cultural show, highlighting the Berber culture and traditions. Besides the fact that it was close to the end of our week and we had already seen the real Morocco, this place felt like a poor attempt at a theme park, or even a circus. Though the horses and their very skilled riders were doing their best to make the evening memorable, the rest of the place was downright ridiculous. Hundreds of tourists were herded into tents for the worst meal of the entire week. If it is not bad enough already to be faced with a main dish of what was literally half a sheep on a silver platter, the rest of the food was terrible. Compared to the delicious meals we had had all week, this was a real let-down.

The advantage of group travel

Do not let this discourage you though. I loved Morocco and I would definitely advise people to go there. Just avoid Fantasia. I have not regretted my choice to book a guided round trip. Several times during my week there, I was thankful to have other tourists close by. I usually have no trouble exploring a city on my own and I almost never feel lonely when I am on the road. The busy medinas of both Fez and Marrakesh are not places I would have liked to explore on my own though, especially not after sunset. Thanks to my choice to join a guided tour, I was always joined by two or three fellow travellers when I wanted to explore. I am not saying it is not safe for a woman to travel to these cities alone, but I did feel much more comfortable getting lost in the souqs together. I would very much like to return to this gorgeous country some day. Meanwhile, I will have to make do with fond memories, and a steaming glass of mint tea.