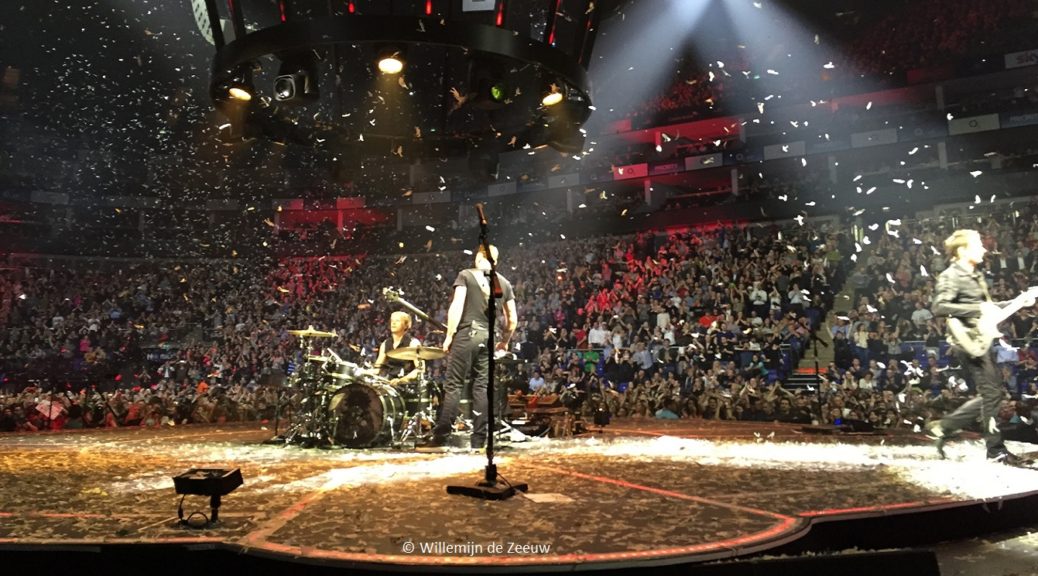 If anyone were to ask me about the best part of my recent trip to London, I wouldn’t hesitate before replying ‘muse’. The 11th of April, the day I went to their concert at the O2 arena was my absolute favourite day. The venue was amazing, the queue was actually quite fun and the concert was even better than it was in Amsterdam.

After their mind-blowing show in Amsterdam the previous month, I was beyond excited to see my favourite band perform in their own country. Unlike the previous show, I had a GA ticket, which meant I’d have to queue. After a rather restless night, I left the hotel relatively early. As I made my way to the venue by tube, I grew increasingly nervous. Remembering the two hours I spent in the pouring rain in Gelsenkirchen, I was not looking forward to more than 8 hours of queueing. When I arrived at the O2 arena at a couple of minutes after ten, I was elated to find that there was no queue outside the building. Instead, queueing is done inside. Other venues should take a lesson from this. No one enjoys queueing in the rain. Arriving at the actual queue, I could not have been happier to discover that there were only about forty to fifty people there. As far as I knew, there was only one entrance. Excited by the prospect of having a decent chance of making it to the barrier that night, I sat down and started the long wait, wishing I’d brought a book. The doors wouldn’t open until half past six.

One of my main concerns about queueing for so long, was the fact that I didn’t know anyone. As a solo traveller, this doesn’t usually bother me, but more than eight hours is a very long time if you have nothing to do and no one to talk to. As it turns out, I needn’t have worried. United as we were by a love for the same music, it proved to be less difficult to make friends with other fans than I feared. Thanks to them, time passed quicker than I had thought. Whilst it felt incredibly strange for me to be able to leave the queue for longer than a hurried run to the bathroom, the others assured me that our place in the queue was safe, as we went to buy pizza and band merchandise. I was very happy about this, as I doubt I would have been able to acquire the desired t-shirt after the show.

Running for the barrier

At about half past five, we were herded through a gate, where our tickets were exchanged for bright green wristbands. The nerves made a reappearance as we got closer to the door. The last thirty minutes of queueing went by agonisingly slowly and when we were finally through security, everyone made a run for the barrier, despite futile warnings by the venue’s staff not to run. As I made my way to my desired spot at the barrier, I was overwhelmed by the sheer size of the stage, despite the fact that I’d seen it before. It had looked much smaller from a distance. I was ecstatic to be able to conquer exactly the spot I’d hoped for, and equally excited that my new friends were able to join me there. The support act’s performance passed by in a blur as the realisation slowly started to sink in: the long day of queueing had paid off. I was at the barrier, next to awesome people, about to admire my favourite band from what I thought was the perfect spot in the arena.

The highlight of my trip

When the moment finally arrived, I was very thankful to have already seen this show from the seats at the Ziggo Dome. Standing front row is amazing in many ways, but it does make you miss certain elements of the show, like the projections on the screens. However, the element of the show that actually gained impact, were the drones. From a distance they look like beautifully choreographed balls of colourful light, but standing underneath them was a completely different experience. It felt like they floated low enough to be nearly within reach, which made them both incredibly cool, as well as slightly intimidating. The atmosphere in this part of the crowd is completely different. It’s an incredible feeling to be this close to your favourite band. Due to the low stage, Muse were much closer to the crowd than they were in Gelsenkirchen, or compared to the Foo Fighters at their gig in Amsterdam. The excitement rose to an even higher level when at some point I recognised Matt Bellamy’s red 7 string guitar. The sight of this particular guitar could mean only one thing: the band was about to play one of my favourite songs. The song, called Citizen Erased, had been making a return to the setlists during this tour, but I had yet to hear it being played live. If I had to pin it down to one moment, I’d say this was the highlight of my entire trip to London. Holding on to the barrier, I watched in awe, whilst a chill ran down my spine at the sound of the entire crowd singing along to the lyrics.

All in all, this concert exceeded even the incredible show at the Ziggo Dome. I left the O2 arena high on adrenaline, smiling like a lunatic, still picking the confetti out of my hair and feeling very grateful for the best concert experience I could possibly have hoped for. As I started to come down from my high, I realised just how knackered I was, barely able to stand on my feet. Unfortunately for me, the day ended just like it had started, as I joined thousands of other fans in the queue for the tube.

3 thoughts on “Unleash a million drones: Muse at the O2”