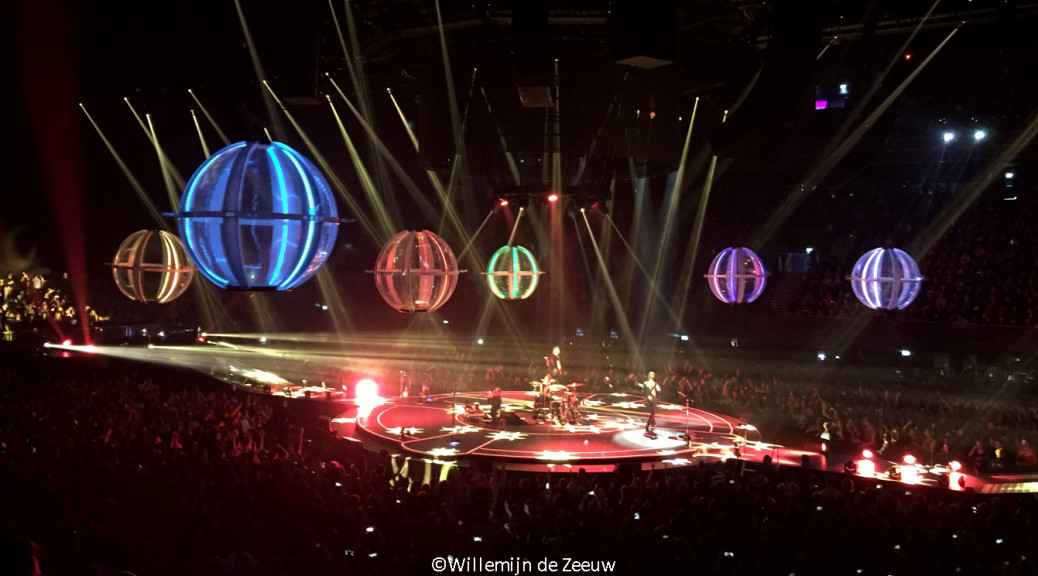 The crowd goes mental as the last ethereal sounds of the Drones choir track die down, whilst twelve large balls of light slowly descend from their hiding place just under the roof, towards the stage in the centre of the arena. This series of Muse concerts is not called the Drones Tour for nothing. At the sound of the first chord from Matt Bellamy’s guitar, the entire venue is literally trembling with the earth-shaking energy from the crowd on the floor.

Shortly after my trip to the Rock Im Revier music festival, Muse’s 7th album came out, and nearly instantly turned into the biggest hype I’ve seen in the fandom so far. A couple of months later, the world tour was announced, with a note that the stage would be in the middle of the arenas. The hype was fed by both the media as well as the band, who released snippets of information about the upcoming tour, and gradually added more and more dates to what would become their biggest world tour yet. Ever since the start of the tour, the concert reviews were full of high praise. Everyone seemed to be blown away by the visuals and the state-of-the-art technology involved in these shows.

As much as I had wanted to buy a floor ticket, they were sold out almost instantly. However, I was pleasantly surprised when I got to my seat last night. Amsterdam’s Ziggo Dome looks much larger from the floor than it does from the first ring of seats. I was very glad to be seated close enough not to miss anything, but at the same time far enough for me to see everything. The beauty of a 360° stage is perfectly captured by the tour’s motto: every seat is a good seat. The concert exceeded even my rather high expectations. Visually, this show was the most impressive thing I have ever seen. During some parts it was hard to decide where to look first. The spinning 360° stage full of lights, the large circular screen above it or the colourful drones that were flying around. Having the stage in the middle of the arena means that unlike at a normal stage, there isn’t much room for big screens which are normally used to show close-ups of the band members. As it turned out, a stunning solution had been found for this problem. Long sheets of sheer fabric descended from the gantries where the drones were parked beneath the ceiling. I was amazed by the quality of the projections, which ranged from the band members being connected to – and controlled by – giant robotic hands, turning Chris and Matt into marionettes, and holograph-like 3D images seemingly floating in mid-air due to the translucence of the screens, to the moment the world literally revolved around Dom, as an entire cityscape showed up on the screens during The Globalist. Despite the fact that there were so many things going on all the time, none of these things really overpowered the music. There were a few surprises, like the moment Matt rose up from the side stage behind his piano at the start of Apocalypse Please, and the increased speed of the spinning centre stage during some songs, and during that amazing drum and bass solo I recognised from Gelsenkirchen. If anything, these surprises added another layer to the experience.

Although I was spared from hearing one of the few Muse songs I dislike last year, this show was longer, so there was bound to be a song that I do not like. Despite that, and things like Matt walking around while singing, without a guitar on him during some songs, and a crowd that refused to stop talking, I can honestly say that this concert was one of the greatest shows I have ever experienced, and I doubt there will ever be anything that can rise above it. The bittersweet moment when the sound of Chris’s harmonica announced the end of the show, I was both happy about the great night I’d had, and sad to realise that time really does fly in places like these. The tour is not over yet though, and I am lucky enough to be seeing another Muse show in London next month, but seeing as I have a floor ticket for that one, it is bound to be a completely different experience. After last night, expectations are higher than ever, and I cannot wait to see my favourite band in their own country.

2 thoughts on “Here come the drones!”