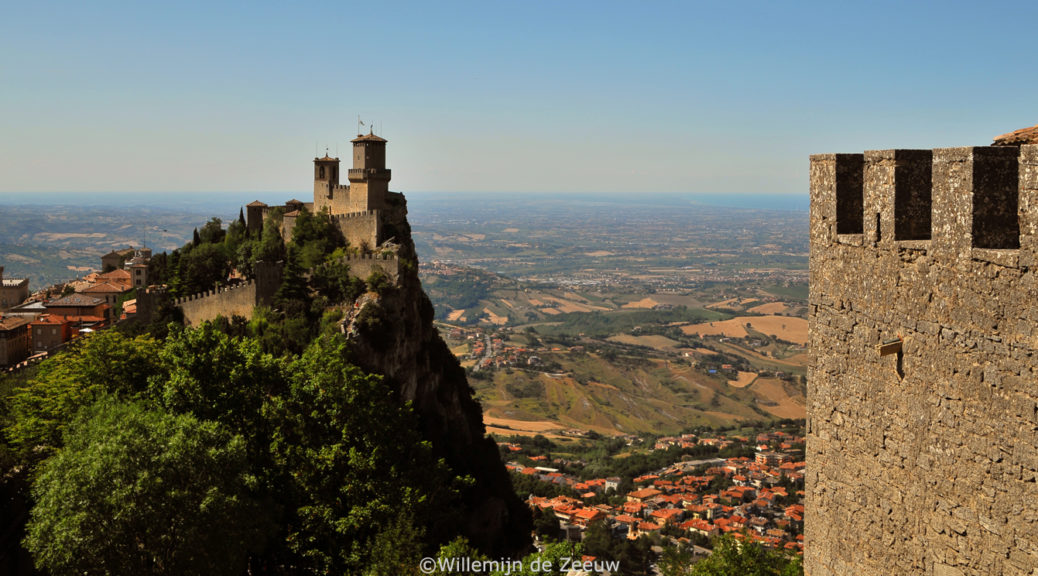 Small countries fascinate me. That was my main reason for adding a visit to San Marino to this summer’s road trip plans. I wasn’t sure what I’d find. I’m not even sure what I expected of the country that proudly calls itself the oldest republic in the world. In the two days I spent there, I didn’t really find out what sets it apart from the country it’s surrounded by. Nor did I find out how a country with less inhabitants than the city I live in manages to have a successful economy. What I did find out, is why it’s one of the most charming places I’ve ever visited and why everyone who is travelling to Italy should consider taking a small detour. These are my 5 reasons why you should visit San Marino.

1. The traffic is a lot less hectic than in Italy

For those who haven’t heard of this country: San Marino is a miniature country which is completely surrounded by Italy. If you don’t want to miss the exact moment you cross the border, you’ll have to pay attention. Much like the rest of Europe, its border crossings aren’t much more than a sign by the side of the road. However, there is one thing that does make it very clear you’ve just left Italy. The quality of the roads improves drastically. This will be especially clear when you enter San Marino on one of the smaller roads. Additionally, the amount of cars seems to be significantly lower than in most Italian towns I’ve visited. Compared to the chaos I’ve encountered on the road in Italy, Sammarinese traffic felt much more civilised to me.

Officially known as the “Most Serene Republic of San Marino”, this tiny country is one of the most tranquil places I’ve ever visited. The title is derived from the Latin word serenissima and doesn’t actually indicate serenity. Instead, it emphasises the sovereignty of the republic. Despite that, it’s a very serene country, both inside the capital city and in the countryside. I’m sure the calmer traffic greatly contributed to this feeling of serenity, but it’s more than that. The country has a relaxed vibe, both in the sleepy little villages, as well as the quiet and picturesque capital city.

San Marino’s capital city is one of the smallest capitals in the world. That doesn’t mean it’s boring. The city has a rich history, which is impossible to miss when you stroll through the cobbled streets. The three towers of San Marino are pictured on the national flag and can be spotted from a great distance when you approach the city. The oldest one, Guaita, dates back to the 11th century. If you’re only visiting one of the towers, I’d recommend Cesta, the second tower. Its location on Monte Titano’s highest peak makes it the best viewpoint in the country. Apart from allowing you to see all the way to the Adriatic coast, it offers an incredible view of the first tower. The inside of the second tower is just as fascinating, as it houses the Sammarinese Museum of Ancient Arms. This location is the perfect setting for the great collection of old weapons that is on display here.

4. See an entire country in one day

Plenty of tourists appear to be attempting to do this with larger European countries. However, in San Marino, it’s actually possible. With a total area of just over 61 square kilometres, it takes only a couple of hours to drive around the whole country and see all of its charming little villages. The country has a population of less than 34.000 people, so it’s by no means crowded. When visiting the capital city, you get the feeling that the locals all know each other because it’s such a small community. Visiting both the city and the countryside could easily be done in one day. I decided to take it slow and spread out my visit over two days.

5. The landscape is incredible

Whether you’re admiring it from the peaks of Mount Titano or by driving around between villages, San Marino’s landscape will take your breath away. The roads wind through rolling hills and past rocky peaks, constantly giving you something to look at. Along with the country’s tranquillity, this makes it a peaceful green oasis. After visiting popular tourist hotspots like Rome and Cinque Terre, this was a very welcome change.

2 thoughts on “5 reasons why you should visit San Marino”